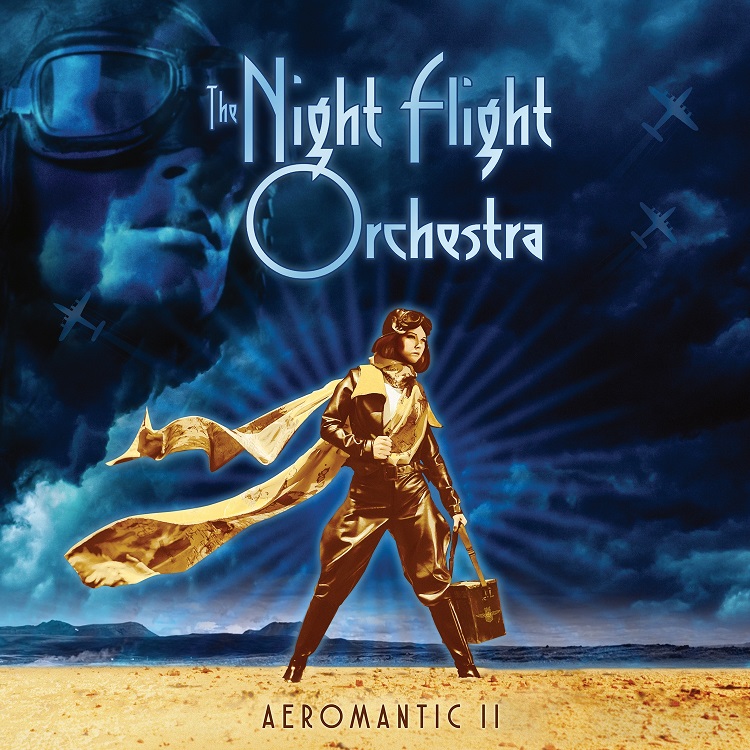 About halfway through “Aeromantic II” there’s a song called “Amber Through A Window”. Suitably pompous to be on a Yes album (I was listening to a podcast the other day that suggested Yes’ songs meant nothing and were “word salad”  which I thought was an apt description), it hides a greater truth.

“Amber is with us wherever we go and I think she’ll keep coming back. She’s our mascot of escapism.” Says Bjorn Strid of the track, and its true, it was included in the title of one of their albums, but that word “escapism” the more I thought about, seemed not just to encapsulate this “….II” but the band itself.

In case you don’t know (never assume knowledge, you are told when you start writing) Björn Strid is the singer in Soilwork and he formed the band with Soilwork’s guitarist David Andersson when they were discussing 80s disco on the back of the tour bus. They roped in Sharlee D’Angelo of Siritual Beggars and a few others – and here we are at album number six.

And its that word: escapism. Even this one was to escape the pandemic. The “Aeromantic” album (called “pure enjoyment” by me when I reviewed it back in March 2020) had just come out before the world went to shit.

Like every other band on the planet, Night Flight Orchestra had to finish touring and after they got over sickness themselves, off they went to – escape? – the studio.

The results of it all are a record that couldn’t sound more 80s if it saw you standing there with your back against the record machine, you’ll see what I mean (as it were) if you listen to the stomping, bombastic intro to “Violent Indigo”. This (its called “Aero after all) soars for the horizon.

It’s not stopping when it gets there.

There are three people that are integral to this that might not get the mentions they deserve, so lets rectify that. John Manhattan Lönnmyr is the bedrock with his parping guitars, while  Anna Brygård AnnaMia Bonde give it something of the disco glitterball. They are all to the fore on “Midnight Marvellous” one of the finest things on here. It could be the theme to Miami Vice and I am sure there’s a keytar in there which is always fun, after all.

It carries on in that vein, because this band is meant to carry on in this vein. “How Long” shines like the “Dirty Dancing” soundtrack, “Burn For Me” can’t see why every song doesn’t sound a bit like “You Can’t Hurry Love” – the video for this one would definitely have blokes with suit jacket sleeves rolled up while they dad danced – and “Chardonnay Nights” adds a kind of Latin thing for reasons I can’t quite fathom, but they are the sort of nights that this band needs.

“Changes” gets proper funky. Robert Palmer would enjoy it, and I’ll swear to you that I’ve heard “I Will Try” before, on just about any 80s chat show intro probably. “You Belong To The Night” shares a (near) title with FM, but shares a (near) vibe with Abba and well, “Zodiac” comes out swinging in its shoulder pads.

The best one here actually, is “White Jeans” a thumping, thunderous disco thing that does as Strid points out go out to those who have an “inclination for lightly coloured jeans…..that they symbolise freedom.” It’s a homage to the LBGTQ community, and the reason it suits them so much is that if metal is a very masculine thing, this is a band made of metal stars that is the opposite. Moreover, its an ace song.

“Moonlight Skies” is smooth, the one you might get a late night dance too, the one that the disco closes with perhaps. I wouldn’t know, in truth, I’ve not been to a club in 25 years and hated it when I did.

Which makes my love for NFO even more baffling I suppose, because let no one tell you the 80’s weren’t vile. They were Thatcherism, “greed is good” and all kinds of horrible facets of human behaviour. Yet they were also the decade I grew up in. The decade that formed much of musical tastes and beliefs, so they weren’t all bad.

I’ve got an old record in my collection “The Hits II” its called. Came out in April 1985 (I know this as I’ve just looked it up) I’d have been nine at the time, and there’s some absolute bangers on there. The best of “Aeromantic II” would fit right in – and that’s always been its aim.