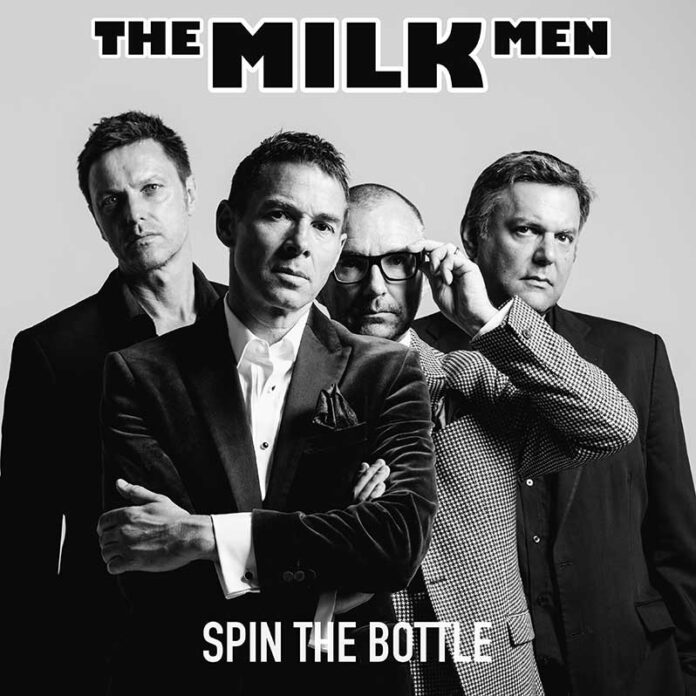 The Milk Men’s fourth album has got me playing my favourite game again.

It’s simple and it follows the modern trend of making music that is so timeless that you spend your time listening to the record thinking to yourself: “I must have heard this before.” Across the ten marvellous – and original by the way – tracks that make up “Spin The Bottle”, you’ll find yourself doing it a lot.

Not that they sound dated in any way. It’s not that. Its more this: music this simple and brilliant must have been done at some point in rock n roll’s rich history?

As it has not. Just be grateful that it is now, yeah?

The opening line on the album is one of the great rock n roll statements: “Got 50 years of woe in the back of my head, blame it on a bad sign, blame it on the sins of the dead.” And you know what cures it? Rock n roll, that’s what. The promise of another horizon, another new start and another new girl.

The guitar solo that Adam Norsworthy (once of The Mustangs, now a blues soloist) plays is pure Chuck Berry, too. Exuberance abounds. It does everywhere too. Jamie Smy starts “Cheap Seats” with the thought “I feel I am on a losing streak, think its time I got back on my feet”. It almost feel that the music is therapy. Somewhere catchier than “Superstitious” it’s a beauty.

“Go Go Baby” wishes music had never come out of the garage, and if “Adelaide” is a ballad, then my goodness it’s a happy one. Shimmering, summer filled. There’s a Kinks thing going on, there’s a bit of the Faces (and that means it sounds like The Quireboys) and if the one about losing your girl to your mate might be a little too close to home for some, then “How Do You Think I Feel” is the type of thing that Noel Gallagher wishes he could write.

“Sing The Blues” is almost like the “ronseal” of this collection, but if it does what it says on the tin, then its still excellent stuff from the top draw and the type of thing you most readily associate Wayne Proctor – drummer to the stars and producer here – with.

That one acts as almost the centrpiece of the album, but there’s no doubting the best thing here. “Gabba Gabba Hey” is the most perfect power pop (and its getting on my “Best of 2022” playlist, I’ll tell you that now). I remember being gutted when I found out as a kid that The Ramones weren’t brothers. This celebration of them underlines that all the best songs sound like they were made by gangs.

“You can’t stop your feet from dancing around” they sing on “Fabulous” and in fairness that’s the magic formula for “….Bottle”, backing vocals from the 50s, all that’s missing is the Showaddywaddy suits. “Highway Woman”, has a Hammond organ riff from James Welch which is glorious, and you sense that Norsworthy rather enjoyed the solo that he rips out too.

Oddly, they save their darkest moment for the last. “Bad Seed” has a little touch of Pink Floyd, a little pinch of gravitas but it still sounds like it is ready for fun as soon as its mates call.

There was a picture knocking around recently that said “Rock n roll was invented by a gay black man from Georgia”, which is probably true, but it is absolutely certain that there aren’t many better exponents of the art in 2022 than The Milk Men. The fastest four piece in the West, or something.