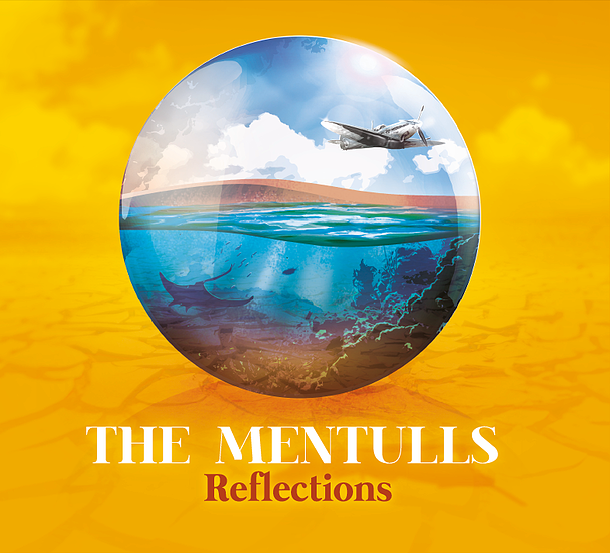 Such is the quality of young blues bands breaking through right now that merely being good isn’t good enough. The Mentulls can point to the awards they’ve won. So can a lot more of bands. They can talk about their live shows. So can hundreds of others.

In short, in 2015, it’s hard to stand out. Unless you are as superb as the Mentulls are, that is.

Because what The Mentulls do to stay ahead of the pack is leaven their blues bread with stuff that isn’t actually blues at all. There are moments on “Reflections” that are more akin to Prog Rock (unsurprising perhaps when you consider that the Tull part of their name is a homage to Jethro) and Deep Purple, say, than anything BB King would do. Largely this is due to Jamie Pipe’s magnificent keyboard playing, but also because his brother is Andrew is such a incredible guitarist that he can do just about anything.

The first two songs explain this variety more eloquently than just words could. “Silver Bird” is a superior slice of bluesy rock n roll, but the title track is a stone cold knockout punch. Andrew’s guitar seems to gently weep before he cuts loose, moves up a gear and casually knocks out one of the year’s best guitar solos.

In the face of such a magnificent song, many bands and many albums might have packed up and said “that’s all folks.” Not here. “Commotion” is dripping with a 1960s feel, and comes on like Cream, while “Home Tonight” is classic blues in feel and content, but there seems to be almost a kind of synergy at work on “Reflections II.” Ushered in by strident keyboard, it becomes an instrumental of jaw-dropping quality and is the best thing on offer here by the time it’s done.

“I Can’t Slow Down” is funky and sassy and “Passage Of Time” is a confident, almost anthemic retro stomp. “Time To Focus” is a wonderful instrumental, which again sees the Pipe brothers bounce off each other magnificently, while Drummer Nick Colman – who is in many ways the unsung hero of “Reflections” – is in fine form here, as Producer Wayne Proctor of King King really brings the best out of the band.

The last of the nine songs here, “Speaking Silence” is built around a swirling organ and shimmers in a gloriously understated fashion to round off a brilliant collection full of surprises.

When MV first saw the band, a couple of years ago as opening act for a southern rock band, we tipped them for stardom. Now on album three, nothing has changed, except perhaps one thing: The Mentulls have delivered on their promise. “Reflections” is stunning.