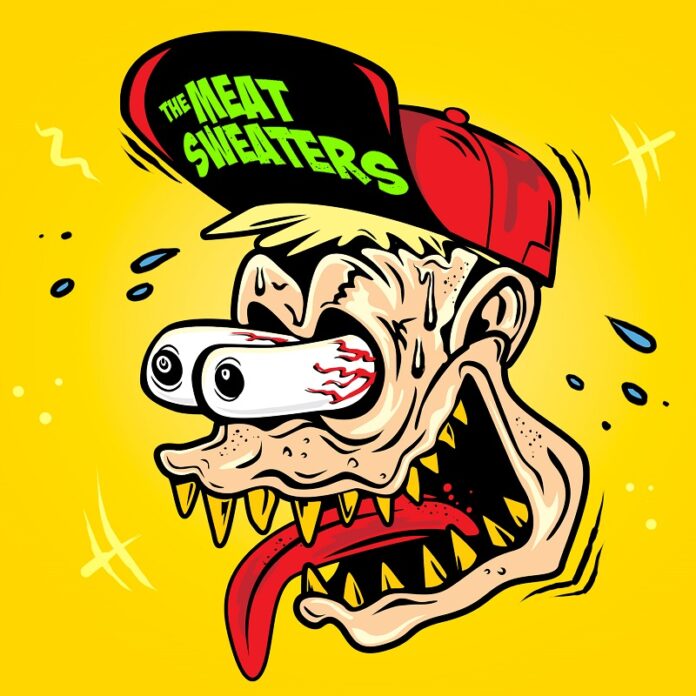 The Meat Sweaters are a synth-punk trio who have roots in Brighton and London, via Stockholm, Sweden who release their debut four-track EP, ‘Paranoid and Sweaty’ this month.

This four track extended play opens with `Body Yoghurt` a manic fast paced synth driven outing that seems to revel in the act of imbibing body yoghurt, which you will find either enticing or repelling and repeats the line “I want to lick it up” just so you are certain of their intention. It`s a sort of delightful mix match of The Normals`s  `Warm Leatherette` and any Devo number you could care to mention. We have in `Got Me Into It` a number that sways back and forth in a frantic fusion of synthy punk with vocals spliced throughout. The band have said that this song will help you communicate with your peers and have a good time

`I Got The Shakes` enjoys some churning guitar riffs throughout with pounding drums and some cowbell thrown in for good measure. It`s kind of hectic, jerky and frenzied during it`s all too brief lifespan which relates to decisions made when maybe advice from others or more thought should have gone into them. This four tracker closes out with `I’m A Success` which is probably the most instantly accessible cut. There`s some underlying guitar chord riffs and a steady drum beat that allows the vocals to relay an upbeat positive mantra that maybe we would all do well to recite each day.

As the band, Wahoo Samuels, Pete Fraser and Jon Palmer have said in their blurb at the end of listening to this EP you may be none the wiser and they confirm that indeed The Meat Sweaters aim to confuse. I have to say I thoroughly enjoyed my introduction to these guys and just wallowed in the quirkiness of their unique soundscape.

If you enjoy bands such as Devo, Gang Of Four, Mental As Anything, Electric Six and Royal Republic, You`ll love these.