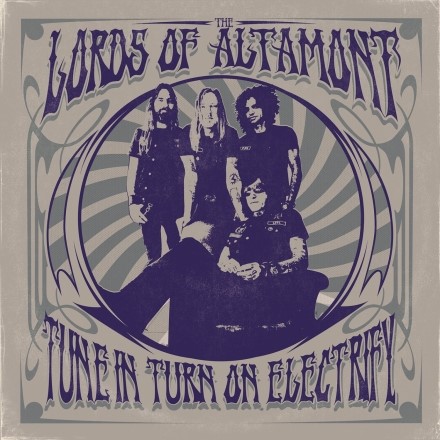 Here’s a thing. I reckon I’ve been doing MV too long. For seven years I’ve sat here, writing these reviews and I reckon I might have reached the end of my creativity.

See, I listened to “Tune In, Turn On, Electrify” and I thought to myself: blimey, this is an easy one, you only have to look at the cover of the record and the song titles and you know what the damn thing sounds like.

Then I read my review of their 2017 album, “The Wild Sounds Of…..” and I’d written this: “One of those records that you barely need anyone to review. Look at the cover above and it tells all. These are leather clad members of some biker gang that have been born to be wild since they could stand up long enough to raise the middle finger to the man. What’s more, it is superb.”

Right, now, either a) I’ve been writing the same old boring crap for four years since that b) LOA haven’t changed their sound much or c) I was right.

Call it arrogance or whatever you like, but I stand by everything. Then and now. LOA are what would happen if they rifled through the back of the Woodstock stage and found a band in the rubble. They don’t even know we’re in the 21st century, and that suits them just fine.

From the off (and this fair old charges out of the blocks) of “Living With The Squares” (I mean, come on) this is exactly what it wants to be. Riffs out of the garage, organ that sounds like it was on a trip, and lead breaks for days, this is rock. And. Roll. And its not asking for your permission.

“Burn Me Out” dons its flares and does the same again – and the Doors-ish groove is delivered with the caveat that this has the Hells Angels guarding its doors. What I mean by that is that for all “Million Watts Electrified” throbs pleasingly as if it wants to pass the incense about, you can bet that it would have a kick to it – literally.

What is remarkable about cuts (and I am going out on a limb here and suggesting that LOA are exactly the type of people who call music “cuts”) sounds so damn live when it was actually recorded in lockdown with the band all over the place. “Keep On Moving” cheerily does its business as if live in the studio (kudos to Dani Sindaco for the solo too) while if you need me to tell you what “Levitation Mind” is about then to be honest, you are reading the wrong review.

The best one here? Tricky, but for the title alone then I give you “Blast For Kicksville”,  to be fair, the energy here means this lives up to its name.

To be fair, though, they just keep coming. “Soul In Flames” with its strings, comes from a different place. The sort of fuzzy fun that Black Rebel Motorcycle Club might enjoy, while “I Just Want” is built around the bass of Rob Zimmermann (I do so hope its him too….)

The Stooges cover makes sense, obviously, and there’s even some Billy Gibbons in the guitar line, “Movin’ (Goats Revenge)” deals with drag racing like it’s on American Graffiti, and if the descent into full on psycedelica was always going to happen, then it does on the somewhat unsettling “Mud (Wet Brain)”.

The name of The Stooges track they cover reveals all, though. “Lost In The Future” and this from a band that appears to have zero interest in the present either. All Lords Of Altamont seem to give a toss about if this is anything to go by is sex, drugs, fast cars and rock n roll.