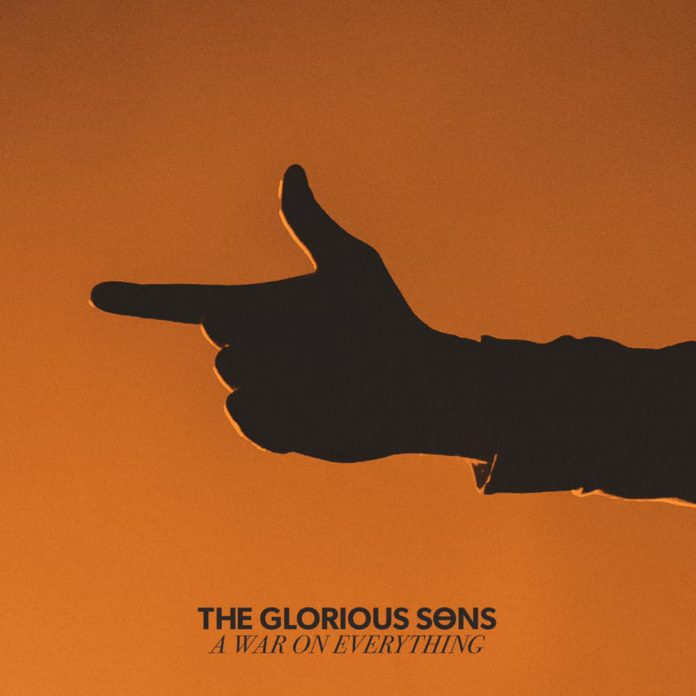 An album that starts like this: “I wanna be normal, I wanna be sane, I wanna look at you and feel something other than pain”, is one that you could make a reasonable guess, perhaps that it won’t be the most festive.

Those are the very first words on The Glorious Sons “A War On Everything”. Their third full length record, it has finally got a UK release and – if you’re like me and you haven’t heard of them before – you need to rectify it PDQ.

A couple of top 20 albums in their native Canada, and a Juno award to go alongside (although, the words of the wonderful Canadian singer/songwriter, Stephen Fearing always stick in my head here: “come on, its not the Grammys….” He said once.) and with “A War On Everything”, they had best get used to some adulation worldwide.

One of those records where you glibly write “crossover potential” on your notes without realising that the reason you’ve written such a statement is that TGO don’t fit neatly into a box.

The opener “Panic Attack” has the same glorious massive hooks of their fellow Canucks, The Trews, the title track is laid back, open topped fun, sort of dreamily gazing at the stars, but the lyrics, when you notice them, jolt.

On the latter, it cheerfully discusses escape, thus: “burn your clothes and cut your hair, baby,” and that is all before “Spirit To Break”.

The Gaslight Anthem get a gold disc for this – and it could have come straight off The ’59 Sound – but the second verse….man.

It goes thus: “swallowed dads’ pills and took a knife to my arm, girl. I just started digging till your eyes took me under, woke up in an ambulance two towns over, blowing kisses at Jesus I came back for you, girl.” And the fact they get this in a three minute pop song with barely a raised eyebrow – honestly, the way the lines are delivered is beyond matter of fact. It’s both amazing and amazingly sad all at once.

“Closer To The Sky” follows it, built on a funky bass, it is as different again in sonic feel, but the words (key line: “I say I love you, she says ‘you’re full of shit’”) are again what separates this from the also rans, before the early Stereophonics guitar line kicks in.

Pick anything at random here, anything at all and you’ll find something a) distinct and b) distinctly brilliant. “Wild Eyes” is essentially a glam rock stomper, “A Funny Thing Happened” throbs like its punk rock, and then there’s something like “The Laws Of Love and War” which is as fragile as the very best Americana.

This astonishingly varied approach continues throughout. The keys of Brett Emmons are to the fore on the soul infused “One More Summer” while the indie flavoured “The Ongoing Speculation Into The Death Of Rock N Roll” underlines once more that any of the lyrics here could be a slogan, no bother. And the piano, and sheer abandon make this one a real towering highlight on a record full of them.

“Kick Them Wicked Things” has the fuzzy feel of The Black Keys, while there’s kind of a 80s pop rock suggestion about “I’m On Your Side”. “Kingdom In My Heart” contrasts with this by tearing down some Royal Blood type roads, while Aussie Indie kids DMAS might be looking enviously on to “Lean On Me Love”, but the idyllic family picture this paints is a world away from the harrowing stuff elsewhere.

“Pink Motel” carries on the theme, gentle to begin with, it encourages everyone to forget their problems, before Brett Emmons works himself into a frenzy, almost stream of consciousness, it is a wonderful, unexpected end, to an album that those two words basically could apply to throughout.

“A War On Everything” has just won the battle. It is absolutely stunning.