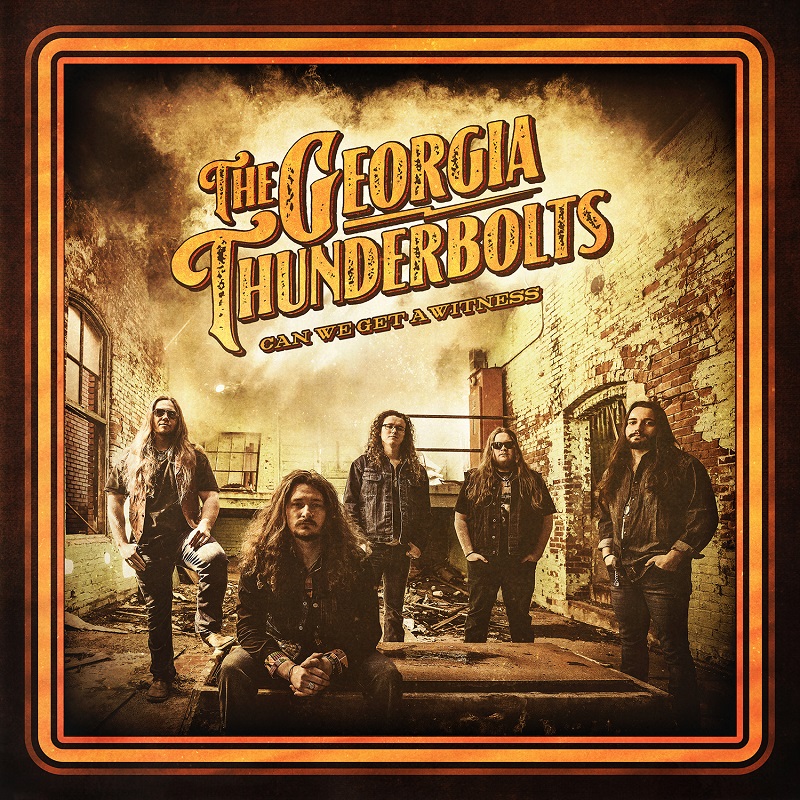 At work today, and as I type this, I was wearing the t-shirt of the English rock band The Virginmarys. On the back of it, are these four words: Peace, Love, Truth, Music.

Someone asked me which of them I wanted most. The answer is the latter, because the latter encapsulates the other three.

That’s what happens when music matters – and it matters all over the world – and hopefully The Georgia Thunderbolts understand.

Surely, the opening of “Take It Slow” is enough to explain it: “Got a full tank of gas and I am headed down the road, no money in my pocket, destination still unknown”, sings TJ Lyle and just think about being that open to possibilities. That feeling is all over “Can We Get A Witness” just as it was their debut EP.

That record, when I reviewed it last year, was a revelation: “Shout it loud. Georgia Thunderbolts are coming and they are set on creating a massive bang. This is their blinding early flash.” I’d said, and not because it was cutting edge, but precisely because it wasn’t. It was real, honest, stuff from a bunch of guys that meant every word.

“….Witness” has the same feel seeping from every pore. One more time with feeling, as it were, with all the five from the debut here again, but the couple of covers right in the middle caught the vibe. “Midnight Rider” (and I didn’t know what it was when I heard Jovi do it before “Wanted……” 30 years ago, maybe GT didn’t either, who knows?)  and Frankie Miller’s “Be Good To Yourself”, done more like The Faces here, are not the most unknown covers, but these boys are fans, doing the music they love. And my goodness, how it shines through.

Their own tunes have the absolute authenticity too.  “Lend A Hand” stomps around like it has serious work to do, and when they go full on Blackberry Smoke, in effect, on the brilliant “So You Wanna Change The World” (pay off line “I hope you’re gonna”) there’s a subtext, and its this: you aren’t going to, so instead make the best of it.

“Lookin’ For An Old Friend” and “Spirit Of A Workin’ Man” aren’t hiding their love for Ronnie Van Zant and the lads – and indeed why should they? But we knew that, given they are both on the EP. Why you should be excited about this band is “Half Glass Woman” (so sleazy it’s looking for a pole in the Sons Of Anarchy’s clubhouse to dance around) and the absolutely timeless sound of “Dancin’ With The Devil”. Both of them are new here but belong in the pantheon of southern rock classics.

The almost title track “Can I Get A Witness” does its grooves big and thick and almost demands you pay it’s bail. Riley Couzzourt and Logan Tolbert can kick out the riffs as well as anyone, and the one for “Walk Tall Man” is as dry as dust, blasted by the arid wind almost.

They can boogie too, as “It’s Alright” shows, not quite country enough for the Grand Ole Opry, its down and dirty with the best of them, and the last one “Set Me Free” clocks in at over seven minutes, and shows a different side to the band. Slower, more deliberate maybe, but deny its ambition and you’d be a fool.

If ever there was a band that subscribed to the idea that making music wasn’t just a nice idea but instead an absolute necessity, then it’s this one. And “Can We Get A Witness” is very much their pledge to tell the whole truth and nothing but the truth.