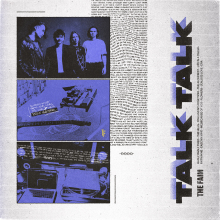 The Faim (French for “the hunger”) are an alternative rock band who were formed in Perth, Australia in 2014 and comprise Josh Raven (vocals), Stephen Beerkens (bass/keyboards), Samuel Tye (guitar), and Linden Marissen (drums). They have a new album out this month called `Talk Talk` which is the follow up to 2019`s `State Of Mind` and touches on themes of nostalgia, celebration, escapism, and self-discovery.

We are introduced to the album with `madly, badly, fixed` which has synth like keys and breathy vocals initially before bursting into life. The vocals soar above the musical platform as the number races along. We have a more anthemic rock singalong with `The Hills` which was written about anxiety and the desire to go back to a place where you can reconnect with yourself and take a breath. The band have shared that this place for them is the Perth hills, where after two years of being on the road, gives them time to reflect on the overwhelming experiences they`ve had whilst touring.

`You (and my Addiction)` is another quite fast paced offering which ebbs and flows as it progresses with lyrics that are rapidly shared throughout these musical waves. We have an almost jazzy opening to `The Alchemist` which is led along with a relentless drumbeat and a reverberating vocal delivery and some supplementary backing harmonies. A quite dreamy, summery track.

`Life in a Cinema` is a fairly brief rocky pop number with some clever guitar riffs underpinning the number. We have a kind of medium paced ballad with `Faith in Me` a pleasant pop like piece. We move to `Ease My Mind` which  has a thumping drumbeat which is joined by bass and guitar to surround the vocal delivery and give it a fairly blistering sound. A track that eludes to the struggles that Stephen Beerkens underwent during an unpredictable time in his life and dealing with those emotions. There`s a quite electro beat to `Me Because of You` which was written about embracing change and letting go of a past version of yourself.

`Flowers` is another anthemic musing with synth swatches, churning, and shimmering guitar riffs along with some pounding drums with vocals rising above and reaching for the sky at times. We have a further up tempo piece with `Jealous Love` which again has soaring vocals  layered over chugging guitar riffs and a solid bass and drum accompaniment.

The album closes out with `ERA` which has tinkling synth keys and a bass line leading us into the spiralling vocals shared. It has a fairly enticing beat as it evolves before it seems to escalate to another level.

`Talk Talk` is an album full of sing a long tunes and anthemic arias and this power pop outfit really seem to be on the cusp of something big. The Faim are certainly a band that as their name suggests have that hunger for success and on the strength of this release it may now be coming to fruition rather than just `Talk Talk`