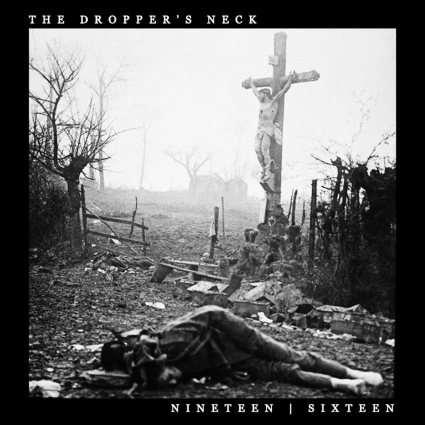 Essex punk n roll mob The Droppers Neck have drawn comparisons with everyone from Gallows to Cancer Bats and you can see why. When MV saw them the other week, we likened them to Faith No More, and they had a certain dark and brooding presence about them.

Listening to this EP – their third – it’s immediately clear that all those things are true, and they are influences that they would probably admit themselves, but there is something deeply original going on here too.

For a kick off not many bands with punkish leanings attempt a concept record. The Droppers Neck couldn’t care less what other bands do. “Nineteen | Sixteen” concerns itself with the First World War, and it does so in a brutal way that pulls precisely no punches. “King And Country” deals with the excitement of young men going to war over a tune that is akin to Therapy? At their heavier end and most angular. Singer Lloyd Matthews possesses a bigger range than Andy Cairns, though, and when he screams “I’ll make you proud” it’s with real feeling and his vocal interplay with other members of the band makes for a thrilling brew.

The tale of the war is told. “Somme” deals with the horror and death. The raw “Line Me Up The Firing Squad” is a raw and unsettling journey into unimaginable pain and “2000 Volts” lays mental illness bare over two and half minutes.

Things get really bleak and even more more uncomfortable on “Monster.” It’s angular bass Jesus Lizard-ish groove hides the unspeakable crimes, as the soldier in the song just wants to get laid can’t adjust to civilian life. The descent into something really horrible is completed when he’s forced back back on to the frontline.

“Nineteen | Sixteen” is as a brave a piece of of work as it is darkly superb. To weave the narrative it does in to what are essentially seven raw and bleak songs is an incredible feat. Credit to them for being able to do it, and being able to neatly swerve a world where these colours don’t run and instead take us into the depths of despair and suffering.

To do it in a punk rock album of less than 25 minutes in length is quite amazing. This is brilliant. It’s a challenging, thought provoking EP of great skill and depth. The very antithesis of Easy Listening.