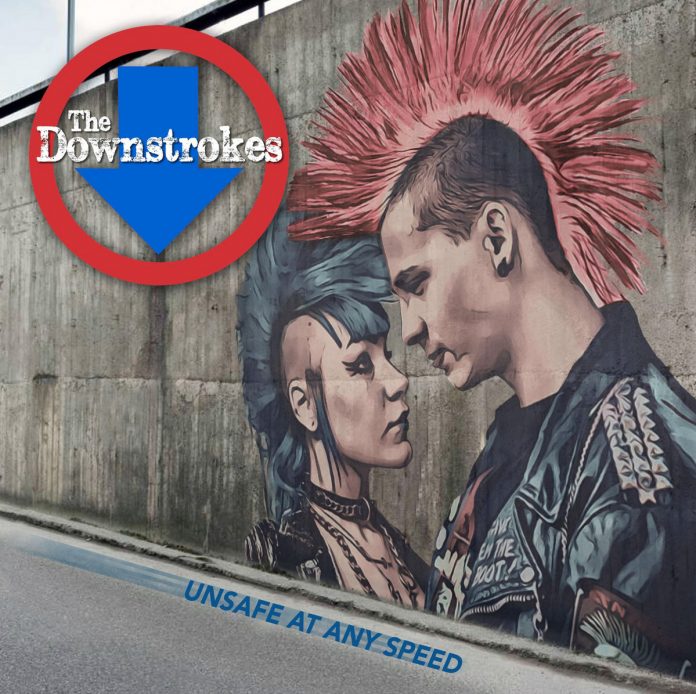 Reflection and nostalgia. Good grief, nearly every review I write is rooted in the past, somewhere.

It’s because. I think, that music is my diary. And if I may attempt the cod-psychology a little further, then “Unsafe At Any Speed” is surely rooted in the same thing?

The Four Men who make up The Downstrokes seem to be doing nothing more than playing the music they’ve always loved and still do, discussing the situations that led them to that point.

“College Radio” is a case in point. There’s an innocence to this. The Buzzcocks get a mention in the first line, in the second verse so do The Replacements – and Culture Club and Madonna short shrift. The whole thing is underpinned by the thought: “The DJ is just one of us.” It’s not too much of a leap surely, to suggest The Downstrokes are too.

“Another Round” is all low slung power pop, bands like The Connection can be added to the ones above, and there’s a crucial one that I’ll chuck in there too. Jason And The Scorchers. It surely can’t just be me that hears Rigenberg scorching past when Gerry LaFemina sings.

“Slow Burn” rumbles with the type of fuzz that you might associate more with Peter Pan Speedrock, but goodness me, these boys can whip it up, and they are masters of the three minute song. Quirky rhymes and word use is always a favourite too and its all over this, but no where better than “Sweet And Sour”. I’ll say no more other than youthful indiscretions should all be made into songs this good.

The pure rock n roll of the title track is glorious. Cars and girls? Well of course they appear and so they should. Likewise, “The Lies We Believed” is the work of men that don’t see why you should be old enough to know better, and even Moby Dick doesn’t automatically seem to be the stuff of punk rock, then TD don’t do conventional – and good luck to them for that!

“Time Bomb” is the idea that the American Dream is over – or in our case, that the rich get richer and couldn’t care less – made flesh, and there’s an anger here. “Let’s Get Dangerous” would – if it had been written by the Libertines – have been seen as cool.

“Toy Gun” bristles with righteous anger about police brutality, and is both one of the best songs on this as well as perhaps the most outright, balls to the wall punk rock, a thought that the last one, “Gratitude” takes and carries on with.

Interestingly, there’s a content in the words of the song and maybe that’s the point. Maybe the fact that they are still here, making music – this music – is enough? Look at the cover of the record. That kid with the Mohawk and his best girl? I am saying right now that those characters this album. Those people are The Downstrokes. But more than that, they are anyone that ever dared dream of the escape that only music can give. Anyone who ever wrote lyrics when they should have been in French class, anyone that ever listened to “Appetite For Destruction” and heard danger. This one’s for me. Or you. Whatever.