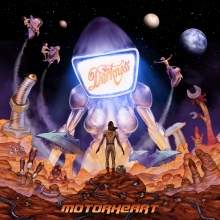 There’s certain musical truths that MV (or at least this bit of it) believes.

One of them is this: “Permission To Land” saved rock n roll.

2003, must have been one of the lowest points in rock n roll history. I was barely listening to any, it was the time when I’d got into Ryan Adams and Elliott Smith because Limp Bizkit and the ilk weren’t doing it for me.

Along came a couple of geezers from Lowestoft and their mates. They’d sold out a 2000 venue in London before they’d got a record deal. And they emerged like they didn’t give a shit that rock was meant to be dead, they were an explosion in a glitter factory, they were spandex covered stupidity, and whats more, they were ace.

They were the Darkness, and they were everything rock n roll needed back then. I saw them in a tiny venue in Birmingham, within a year they were playing arenas. They were living the dream.

Fast forward to 2021, and they are doing what they are born to do. And – let’s admit it – there are those that hate them. I get it, I hate Queen (and I even get there’s a bit of Queen in them) but in fact, I’d argue that they are even better than back then, by simple virtue of this: They tour each year in the same venues each time, so they don’t have to pander to anyone. They just do exactly what they want to at this point.

“Motorheart” is what happens – essentially, when no proverbials are given.

From the kick off this is utterly crackers. “Welcome Tae Glasgea” is so in love with the city Rab C Nesbitt might as well do backing vocals – there’s also a line about the women being gorgeous and the food ok. And that’s before it namechecks the Barrowlands.

The thing is though, that this is only just getting started in the crackers stakes. “It’s Love, Jim” sees Justin Hawkins shagging an alien, “Motorheart” itself is a power metal homage to shagging a machine. But, here’s the thing. They are fabulously catchy, and proper metal. You go through stages. First you go, “well that’s cool” then you realise he’s just sang about needing a screwdriver to get her undressed, and then you can’t stop singing it. It was ever thus with The Darkness.

“The Power And The Glory Of Love,” I am going to go out on a limb here and say that no one here doesn’t know it sounds exactly like AC/DC. Yet it could only be these boys.

“Jussy’s Girl” – and yeah we see what you did there – is a mid-paced chugger that is much fun, “Sticky Situations” kind of revives power ballads, kind of sensibly (ish). “Nobody Can See Me Cry” breaks out some punk riffs for ….well I don’t know. It does. That’s it.

“Eastbound” a homage to going home, is perhaps the most straightforward and its done with a real love, “Speed Of The Nite Time” on the other hand, is a strange affair. Not for its ludicrousness, no, rather because you weren’t expecting a post-rock tinged, dark thing to end the record, and yet, we are where we are.

It’s a marvellous thing, is “Motorheart” – there’s even a deluxe version on Spotify with three more. One is called “It’s A Love Thang (You Wouldn’t Understand) where Hawkins is to scared to shag a real girl (“there’s a walnut in my pantaloons” he sings) which seems to go against every cliché in rock n roll.

That’s the album too, and whether you like it or you don’t, The Darkness aren’t changing and they don’t care what you think. If they did, if they were remotely worried, this doesn’t get made.