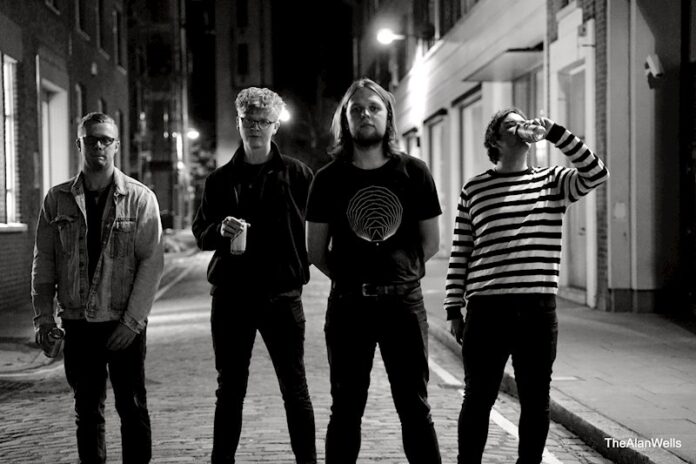 CAVALCADE release their new single ‘Dreaming About‘, out now on Golden Robot Records.

East London four-piece act CAVALCADE are currently creating waves with their version of blistering indie rock and roll. Recently signed to Golden Robot Records, CAVALCADE recently released the single ‘Feels Like Home’ and back it up with another ripping new track ‘Dreaming About’ which is available now on all digital platforms.

‘Dreaming About’ is the latest offering from the highly explosive CAVALCADE. The song offers a personal perspective on the lessons learned and the priceless experiences gained from a time spent with a person you loved. Despite being reflective and patient lyrically, the song is fast and ferocious from start to finish to emphasise the turbulent mind caused by the breakdown of a relationship.

Lead singer Connor Duggan comments: “‘Dreaming About’ was born out of a recognition of just how much two people can learn in a relationship. There are frustrations and longings that come from that reflection which brings an understanding that there are things that have irreversibly changed along the way.“

ABOUT CAVALCADE
CAVALCADE are a band making waves in rock and roll. Packing venues inside the capital with their electric live shows, they have proved that the Cavalcade journey is one to watch.

Cavalcade are made up of Connor Duggan (lead vocals/guitar), Jack Campbell (lead guitar/backing vocals), Tom Nunn (bass) and Steve Norris (drums).  Despite starting the band to write and record one song that they could cherish forever, it is safe to say that the band’s success has snowballed since their inception in 2017. Taking their music from local pubs in London to the Isle of Wight festival and to venues across the UK – even overseas to Gibraltar and Spain – word of the band’s spirited songs and vigorous live shows has spread on an international level.

“Proving that the spirit of The Buzzcocks is still going strong.” – John Kennedy (Radio X)

“Perhaps it’s their jaw dropping riffs that give them the edge, or it may be the energy and vigorous no-shit attitude they have on stage. Either way, this band are fast becoming one of the most interesting and fun live bands emerging onto the scene.” – Indie Underground