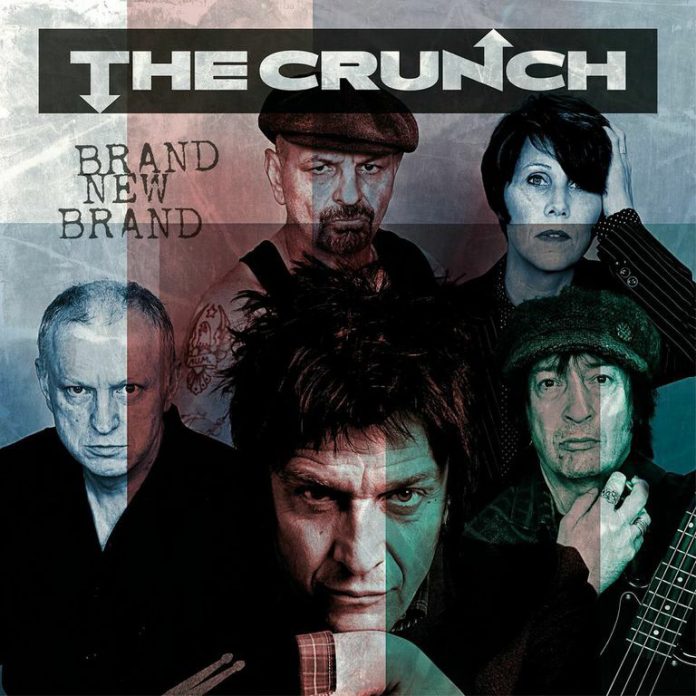 Even allowing for the fact that the word “supergroup” has had it’s meaning diluted over the years, not least because this far down the rock n roll road, a lot of people have been in a lot of different bands, there really is no other way to describe The Crunch.

Featuring three rock and punk icons, in the shape of guitarist Mick Geggus (Cockney Rejects), bassist Dave Tregunna (Sham 69 / Lords of the New Church) and drummer Terry Chimes (The Clash), would be enough to prick some interest on its own, but then you can add in the fact that the frontman for this thing is Sulo Karlsson of the wonderful Diamond Dogs (as an aside of you haven’t heard their song “Hand On Heart” then do it. Now. And then read the rest of this review. Go) and you’ve got yourself something worth checking out.

Despite its name “Brand New Band” is in fact The Crunch’s second record. The first, “Busy Making Music” emerged in 2013 as the result of a jam session the year before. But this one has seen the addition of backing singer Idde Schultz who forms a key part of the sound throughout with her vocals.

Despite the past of three of the members there is little to connect “….Band” with punk. From the off, with the Springsteen-esque “Lonely Beat Of The Heart” this is rock n roll at its purest. Indeed there is a real 1960s feel to the track, right down to the handclaps in the chorus.

Not a record to outstay it’s welcome, the tracks here are essentially perfectly formed pop songs “Limited Edition” has a wonderful hook and bridge and the title track is a three minute stomper of a thing, elevated with by Schultz’s gorgeous harmonies.

The Crunch can do love songs too – albeit to rock n roll – “25 Hours A Day” is Sulo’s open letter to the music that’s ingrained in him (unless the line “from the first lick you charmed me” has a more adult meaning, of course….). This theme is further mined with “Solid Rock Steady” which sees Schultz take centre stage to great effect.

Not that the album is a one-trick Pony, though, “Barricade Blues” and “Save The Glow” are reflective acoustic affairs and lead single “Neon Madonna” is a reggae-infused song that reminds of “Bankrobber” made famous, of course by Chimes’ former employers.

However, for MVM’s money the band is at it’s best when playing rock n roll. “Return To Form” is exactly that and the defiance of ending tune “Go Back To Go” is most welcome.

Ultimately this is a case of the stellar parts adding up to something thrilling. When it comes to the….urmm Crunch, this is a damn fine rock n roll album. And it never has pretensions to be anything else.