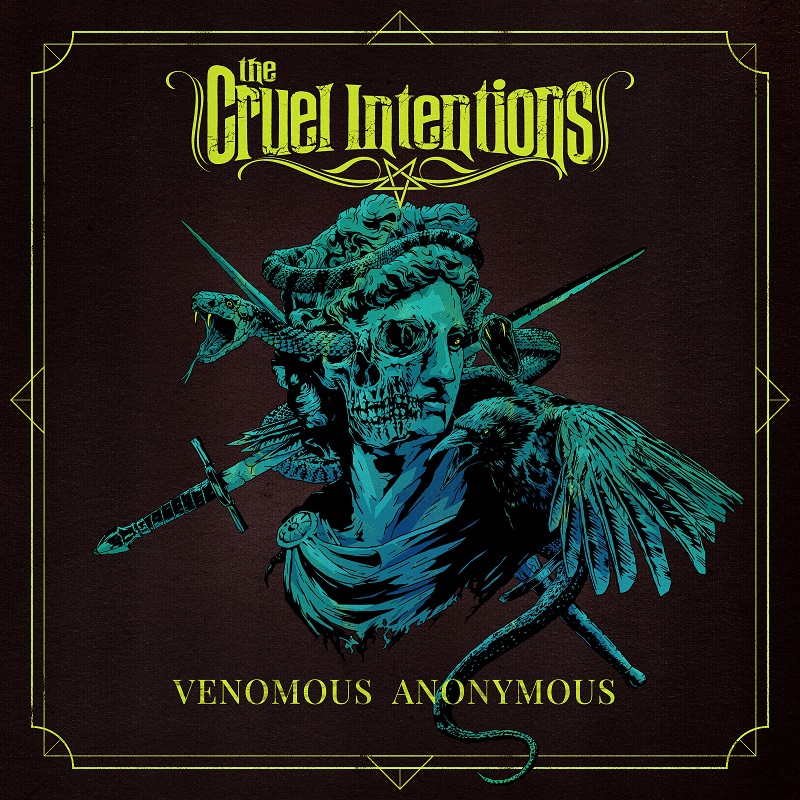 The other day, MV’s Don text me a picture. The fella in it looked like he was in some stoner band (he could have passed for Corrosion Of Conformity at a push) or that he was living under a bridge somewhere in a Brothers Grimm story.

Accompanying the text was a simple message: “Guess the guitarist?”. Truth was I didn’t know, so text back: “god knows, looks like no one I can place, it’s probably C.C Deville or something”. It was. And yeah, he looked like something that the cat had dragged in.

So, the point is, if we live in a world so removed from glam, that even the best guitarist in the genre has given up, there’s no hope, right?

Well, hang about, ye of little faith, because somewhere in Norway (my bet is on the nearest strip club) The Cruel Intentions exist And single handedly, as well as totally un-ironically, they are here to glam things up better than anyone this side of Faster Pussycat.

“Venomous Anonymous” is their second record, and it starts like this:

when you drink, when you smoke

when you scream, when you cu cu curse

Gotta fight ‘til it hurts

Ok, I know what you’re thinking when you read the words to “Repercussion”, and its cool as I thought it too. ‘I’ve heard this before’. Yes, yes you have. So have I, and so what? This rules.

The title track doesn’t even hide its love for Bon Jovi. Christ almighty, it steals from “Born To Be My Baby” with no guilt at all, but here’s the thing: I am going to go out on a limb, here (hyperbole has never been a problem as far as this website is concerned after all) no one has written a better chorus than the one on “Sunrise Over Sunset” this year. Its crazy how this bastard sticks in your head. But it has a snippet of Lemmy, so that’s worthy of bonus points.

The band (formed by Lizzy DeVine from the ashes of Vains Of Jenna) are very much a Sunset Strip band too, they aren’t The Cathouse, nah, these are the boys who were in the Rainbow. To be fair to them, they aren’t dated (and you can ignore the fact they are dressed like A Dog’s D’Amour tribute band too) rather “Casket Case” seems to have rifled through The Murderdolls back catalogue, and “Kerosene” explodes like a Hanoi Rocks number that you haven’t heard yet, but for all that injects some freshness.

It’s a mark of their ability not to conform that the big ballad here, “Salt i Ditt Sår” is sung in their native tongue (one for the Poison fans, there). “Salt in Your Wound” (I can either speak Norwegian or use Google Translate, you choose) is a cracker too, even if you never had them down for going full on Kverlatek.

In fairness, they seem happier when mixing outright sleaze with some Euro rock (think H.E.A.T) as they do on “Final Deathroll”, but “Goddamn Monday” is the type of hedonistic stuff you need, frankly. “Thursday’s just a waste” sneers DeVine (he only lives for the weekend, obviously) and the closing soaring chorus is straight out of the Desmond Child playbook (or Eurovision, take your pick, pop pickers).

“Bad Vibe” is an English language mid-paced rocker, sort of like a ballad, sort of like Winger, and if “Chemical Vacation” lacks subtlety, then it knows how to recycle LA Guns riffs from the Cocked And Loaded record.

There’s a little more than spandex trousers, Girls, Girls, Girls, and numbers on bathroom walls to this mob, though. On “City Of Lice” there’s a hook that goes “we all came here to party, but we all ended up here as parasites” and that’s not quite “Slipped Her The Big One”, really, is it?

So while their hearts are leopard skin coloured and you probably would be best to keep them away from your wife/girlfriend/sister just in case, there’s something just a little nasty to the glam of The Cruel Intentions. That is to say, if “Venomous Anonymous” is more than the bubblegum sound it appears. No, this might be sweet on the outside, but strip away the layers and there’s something pleasingly unpleasant underneath.

Like, they might want action, but they’ll settle for a fight in the alley just as easily. It all lets off steam, after all.