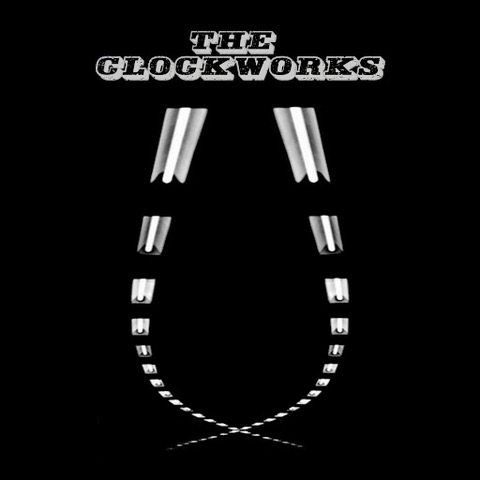 The Clockworks are James McGregor (Vocals/Guitar), Sean Connelly (Guitar), Damian Greaney (Drums) and Tom Freeman (bass), a four-piece outfit who were formed in Galway and are now living in London. Their self-titled four track EP is released this week and fuses intense post punk sounds with snarling kitchen-sink observations.

This extended play opens with `Endgame` which was loosely inspired by the Samuel Beckett play of the same name. It`s a pretty fast paced offering with the lyrics fired off almost in a scatter gun approach over a platform of churning guitar riffs, a steady bass line and thumping drums. Vocalist James McGregor shares “The idea for the lyrics was to have this character who’s a bit obnoxious playing a game of pool at the pub, and as the song progresses we get to peel him back and see that the game he’s playing is really against himself. The title, apart from relating to the game in the song, is a reference to Beckett’s play Endgame, which we thought touched on the themes/ideas/feelings of the song. I also liked the way that Beckett’s play had a through line of a chess game, like this song has a through line of a game of pool.” I have to say I loved the lyric of “We’re post punk, post truth, post Europe, post youth, postmodern, post faith and God and post post too…” near the start of track, a cracking almost contumacious attitude. We have a similar vibe with `Money (I Don’t Wanna Hear It)` which seems to relate to the everyday grind of life where money is key to it all and can become a real bugbear in a relationship. It races along and I can imagine the chorus becoming a line that will be recited back at the band in a live setting.

`Feels So Real` is a really anthemic number with another pounding drumbeat, blistering guitar riffs and vocals that are shared almost belligerently. Again, singer James shares that “this song is essentially about how all the things that make up the city; the good, the bad and the ugly are all what make it exciting… In a way it could be about finding hope in hopeless circumstances.” This extended play closes with `The Temper` which allows the band to display their musical dexterity as it`s a stripped down ballad telling the story or aftermath of a relationship that has gone south due to one participants aggressive behaviour.

The Clockworks seem to have it all on the strength of this EP and as the Creation boss Alan McGee has signed them to his It’s Creation Baby label, he obviously feels the same.

There are gonna be some comparisons with bands like The Murder Capital and Fontaines D.C. but these guys really have their own stamp and style. I`ve seen the other two bands mentioned and am now really looking forward to catching up with Galway`s finest.

The Clockworks ensure that finally The West`s Awake.