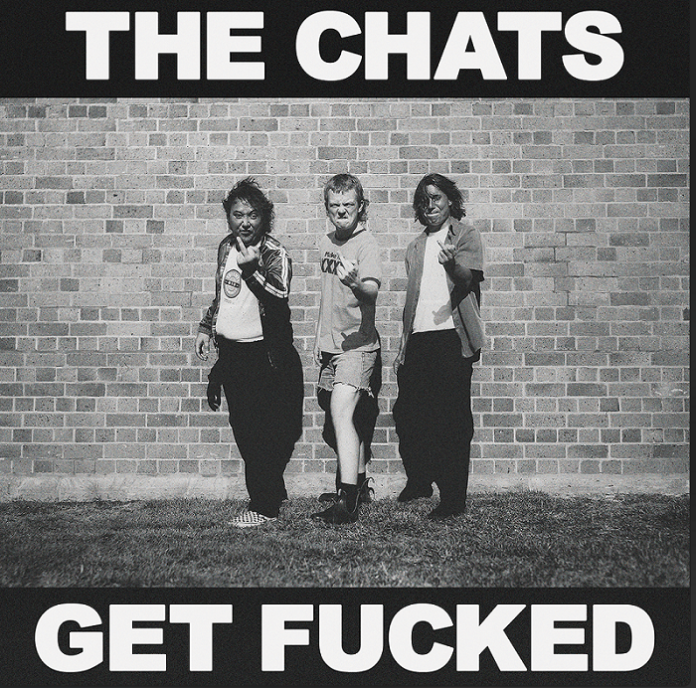 “Put it this way, we’re certainly not bringing out any acoustic guitars or anything”.  So says Eamon Sandwith, “singer” – for want of a better word, from The Chats.

Never has a truer word been spoken. The Chats remain the best modern punk rock band. They first came to my attention when they released their stunning “High Risk Behaviour” record back in 2020. It was, I said, on the review: “More than a rock n roll record.” Before adding the thought “Christ knows what exactly….”

Then there was a pandemic. It might have derailed them a bit. It didn’t. Nothing much does. Not even losing a guitarist. They replaced “Pricey” with Josh Hardy (the fact he has a full name proves that either he’s already done a stretch or isn’t on the authorities’ radar yet). They recorded “Get Fucked” in six days. And here’s why I love them. Discussing the recording process, Eamon reckons: “They weren’t like hardcore working days, we would start at 11 and finish at 4, and in the middle of that we’d go to the pub for lunch for two hours, and have a few beers. Then we’d go, ‘Oh shit, we better go back and do some recording!’ Our work etiquette wasn’t great. If we’d only booked two days, we probably would’ve done it in that, but because we had a week, we were like, ‘Let’s treat it like a holiday!’”

So basically, there’s about 24 minutes of gorgeous, filthy fury. “6LTR GTR” reckons they don’t need a “flash fancy car”, and that’s fine, “Struck By Lightning” does a bit of do-wopping. Think Stray Cats if they were Rottweilers. In heat and “Boggo Breakout” (it might be about the drummer Matthew Boggis – to be honest I haven’t a clue) and for 35 seconds “Southport Superman” does something that is best not to think about.

The point is here, this is not a band you want to move in next door, nor unless your mum is Beki Bondage, would you bring them home to meet her. But my goodness, they’ve got something, “Panic Attack” worms its way in, “Ticket Inspector” is gloriously petty, and although we’ve had some fun with this – as we absolutely should – it does need saying that these boys know exactly what they are doing and the new man’s guitar is brilliant.

“Price Of Smokes” – which basically gives its thing away in the title – is slower. It dates back to their early days (when they were less furious) but it does rather helpfully end by wishing death on “those bastards in Parliament”. I wouldn’t do such a thing of course, but Thick Lizzy, god almighty.

“Dead On Site” laments health and safety. Kind of. It’s incredible, that’s all I’ll say. “Paid Late” is built around a bass line that is pure SLF, but to my knowledge, Jake Burns has never rhymed “Paid Late” with “mind your own fuckin’ business mate” and the absolute best thing about The Chats is there’s no mystique. Lets be honest, “I’ve Been Drunk In Every Pub In Brisbane” doesn’t have a big reveal, it just parties in the boozer.

Likewise “Out On The Street” observes the decline of someone they know – adds a Chuck Berry guitar – and sods off in two minutes 1 second, while fittingly for a band that once lived in “Sunshine Coast”, “Emperor Of The Beach” takes to task tourists. “This place,” spits Sandwith, “has gone shit because of c**t’s like you.” Quite.

The new man even provides the last two. “Getting Better” is sort of turbo charged rockabilly, while “Piss Rash” is exactly what you’d imagine a song called “Piss Rash” to be. Kudos for reviving the hidden track, mind you. Not since 1999 have they been a thing!

And there’s a wonderfully “no shits given” retro if you like, attitude to this. Maybe its where they are from? My brother once went to Brisbane (on the Ashes when the Aussies dicked us 5-0 in 2006) and when they touched down the pilot said to set your watch back two hours. The bloke next to my brother said, to no one in particular: “yeah and your mind back 20 years”. And the older I get I am not sure that’s a bad thing.

I am certain, though, that “Get Fucked” is so good its almost sexual. This is either the best record of the week, or the worst. There’ll be no inbetween.