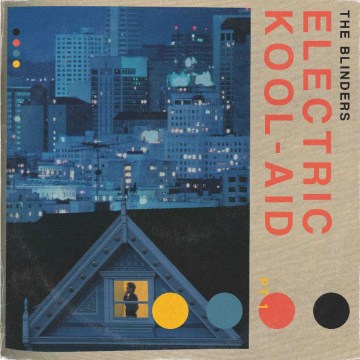 It is one of the greatest joys in life, honestly, when you come across a band you aren’t expecting to like – and love them.

What I mean is, give me some Scandinavian punk rock, classic sounding rock, political singer/songwriters, some country or modern blues and I can find something to say.

Indie music? In truth, not so much. A liking for Oasis, DMAS and (some) Libertines isn’t exactly going to have me in the NME’s readership very soon. But that all being said, when The Blinders came along 18 months ago or so and dropped “Adventures Of A Stay At Home Psychopath”, at the risk of sounding like one of those memes you see on Instagram, it was so good you couldn’t ignore it.

Looking back at my review, it was clear that I had no idea what was going on: “and at various points it is a nightmarish world which basically sounds like Nick Cave is being backed by The Libertines (with added Bugs Bunny, naturally). Confused? You will be, probably.” Was the best I could muster.

And if that was the case then, at times “Electric Kool Aid Part One” is even more tough to pin down. Not always, but we’ll get to that.

To be fair, you can see why. They were a three piece. Now a quintet. Another guitarist, a new drummer, and keysman. Oh and there’s been a move across the Pennines too. Doncaster is no longer home, Manchester is.

The results are a more expansive, more layered and considered sound.

“Pretty much all the songs came from some form of jam state.” Reckons Thomas Haywood, the bands singer and guitarist, and that’s reflected in the range of things going on. The guitars on the title track  – effectively just an intro – initially seem like they are going to explode like some Virginmary’s style thunder, but they don’t and instead, the thing swirls. When the superb “Barefoot Across Your Water” hits, though, it is immediately obvious what the keyboards of Johnny James have brought – something timeless akin to Roy Brittain say, in the E St Band.

It can still hit hard, mind you. Fans of Slow Readers Club’s dark post whatever sound should get to “City We Call Love”. The vibe is one of late night clubs, the sort I never went to then and certainly won’t now, but it’s a mighty song, that’s for sure.

Indeed, the only thing you can be truly sure about here is the quality of the songs. “The Writer” rockets along with a real energy, and the bass of Charlie McGough (the other man still left, as it were) propels this, and whilst its not too hard to talk about the Arctic Monkeys here, then there’s a lot more going on.

The happy sounds of “Hate To See You Tortured” (its intro is like a day time TV show) is shattered by the opening words: “I wouldn’t say I am depressed, but every morning on the way to work I hope the car does crash into a ditch”. That’s the best advert I can give you into this world, into The Blinders. What they do is the last thing you think they will, and if you go “he didn’t, did he?” then it probably did happen.

A band of true originality, this is very much a statement. A new beginning, maybe, but one with all the old skill.

It’s worth reflecting that “Electric Kool-Aid” wasn’t the stuff of the cliched Jim Jones cult. Rather it was the name for a version of the drink spiked with LSD. Seems apt, then.