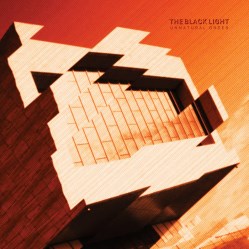 The Black Light is a progressive rock band based in Swindon and Winchester and consists of Martin Bassett (Guitars, Bass, Keys, vocals) and Andrew Watt (Drums, keys, vocals), who first met and began making music together whilst at college in 1996. The band’s sound is a progressive-leaning brand of pop rock that draws influence from acts such as Radiohead, Mew, Oceansize, The Smashing Pumpkins and Agent Fresco. The focus being on writing catchy melodic hooks combined with ambitious song structures, irregular rhythms, and punchy riffs.  They released their debut album `All Forgotten Dreams` in 2017 and released their second album `Unnatural Order` last month.

We are gently led into the album with `Intro` a brief piano soundscape which blends into `Crush` which has intricate guitar chords and a gentle vocal which is joined by a quite forceful drumbeat. The track itself becomes more vigorous as it evolves but still retains some of that dreamlike melodic texture. It seems to relate to somebody drifting through life, into a relationship and kind of awakening to reality and the consequences of how it effects one and almost panicking.

`Left For Dead` has a much more post punk powerful feel and seems to tell of pushing back against something or maybe someone who has previously mistreated or wronged them. It does have an interesting time out midway through where it almost rests before resuming it`s intimidating sensibility while rising and falling in volume as it concludes. This is followed by `Interlude` a brief musical interval of sorts with a percussive backbeat and synth like flowing waves, oddly alluring.

`Never The Right Time` is a cracker of a track which had it all and reminded me of Rush with those unpredictable rhythms and melodic catchy chorus and some really `in your face` powerful hooks. I thought `It’s Not Happening` was wonderfully mesmeric. It was slower in pace but enjoyed some complex guitar riffs and a pounding drumbeat which kept the tempo moving. There were some interesting curves as it developed which sounded akin to a waltz like structure. It was a further offering which I found quite hypnotic.

`We Are Animals` is a nigh on ballad like composition which builds in stature as it progresses and appears to be a reflection on life, how we are so self-absorbed and ought to maybe step back and evaluate what really is important. We have a quite anthemic submission in `Be Anything` which is a rumination on how we were all encouraged at a young age that with hard work we could accomplish anything we set our hearts on. The vocal delivery was delightfully soothing and I loved the various guitar chords shared throughout.

`Try` returned to the more complicated guitar style of previous numbers with lyrics that matched which spoke of the difficulties and setbacks we have in life but we should at least make a determined effort to attempt something that may alter the usual outcome. There was a more ethereal vibe to `No Going Home` which may well have been a metaphor for a relationship that has run it`s course. A track that was pretty difficult to classify as it ebbs and flows in tempo and styles throughout.

`Sink Or Swim` was as near to a straight rock out as these guys get. A contemplation on the drudgery of life possibly. I found `Fracture` was quite a melancholic arrangement. There`s a brief segment at the beginning with an inserted tape which has the sound of children playing before being ejected. This maybe evokes this introspective musing on how the narrator`s life has turned out and if it could have been different. The last couple of minutes grow musically in volume as they conclude that it`s best to just accept and make the best of where you are.

The album closes with `Up In Smoke` with seems a quite larger than life opus. A further unsatisfactory relationship seems to be the order of the day. The music was a real cacophony of soundscapes.

I really got drawn into `Unnatural Order` and found it an absorbing and compelling listen. It has some prog elements but it also encompasses a number of other musical genres so it almost defies categorisation. I found it had a kind of subtle intelligence, was quite innovative and that the lyrics were thought provoking. If you like your music to not only make you nod your head but stretch what`s inside it – The Black Light are your band.