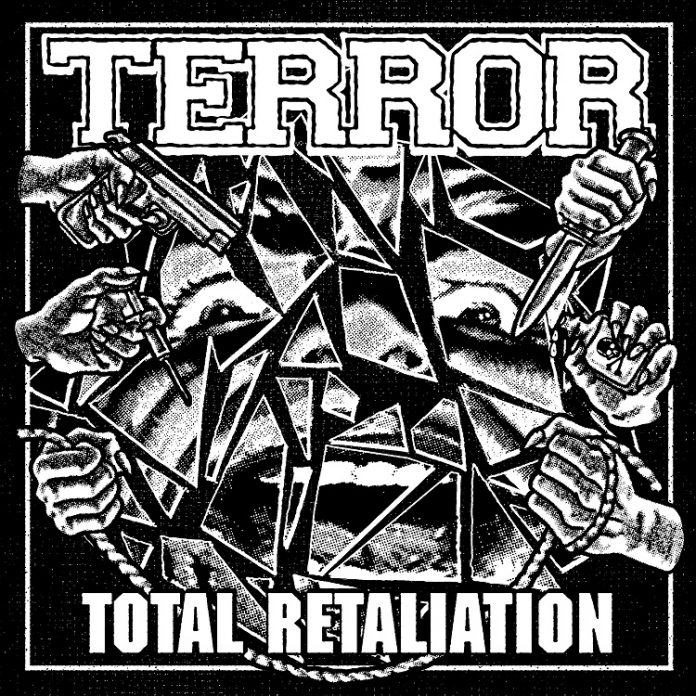 Around halfway through “Total Retaliation” there’s a gangsta rap song that goes by the name of “Post Armageddon Interlude”.  It features as its last line: “its murder, baby…..” after spending the previous 90 seconds telling you about killing people.

It’s gruesome. It’s not the sort of thing you are going to listen to with your nan at Christmas (unless your grandma likes death on the mean streets, in which case, have at it) but more pertinently, just think: if that’s the interlude then imagine what the rest of it sounds like……..!

The answer, actually is largely what you’d expect if you know Terror, or know anything about hardcore. This is hardcore for those that think the brilliant last Madball album didn’t hit hard or fast enough.

Basically, there’s 13 songs here (and it is a feature of Terror that – like all the better bands who crush like this – these are proper songs) are like being bludgeoned repeatedly over the head for 28 minutes by Five West Coast boys  who are completely without remorse.

It actually all begins in restrained fashion. “This World Never Wanted Me” comes in with a slab of a riff and a healthy dose of nihilism. “Mental Demolition” on the other hand, does things at a million miles an hour and its too busy smashing the shit out of shit to be nihilistic.

“Get Off My Back” sort of does it slow and fast, but “One More Enemy” encapsulates this whole thing perfectly. “One more enemy,” spits Scott Vogel. “don’t mean shit to me!” and basically that’s the point. It’s Terror against the world, and I reckon Scott and the lads would win.

There’s a thunderous breakdown to “…Enemy” too, and its staggering how much this album manages to get through in brief battle. This is not one where they all sound the same. “Break The Lock” is like gang warfare, the title track by contrast sounds something like Slayer, “I Don’t Know You” sounds utterly filthy, “Behind The Bars” is built around the bass of Chris Linkovich, but there’s formidable lead guitar here, as Martin Posner and Martin Stewart find some superb sound.

And as it all ends with “Resistant To The Changes” which for this record is almost a prog rock thing at three minutes, I am drawn to something I read about an entirely different type of album this week. Reviewing the new solo opus from ZZ Top’s Billy Gibbons, wherein he said this: “this is all about the three T’s: taste, tone and tenacity.” In its own way this is the same. Producer Will Putney (of Fit For An Autopsy) understands this and has let Terror go and run amok with it.

Hardcore, unlike its sort of cousin thrash, never does things by numbers as most recent thrash has no passion, no authenticity, no love for its craft. “Total Retaliation” has all those things and way more besides. It’s not a world you’d like to live in, but the pain and anger makes for a special album.