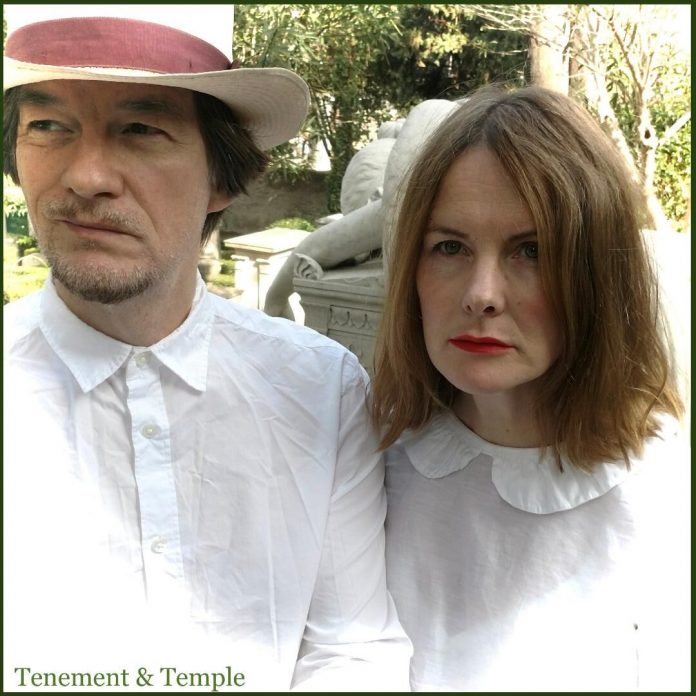 Johnny Smillie is a renowned producer / engineer, who alongside Monica Queen, a much sought-after singer who has worked with The Jayhawks, Grant Lee Buffalo, Shane MacGowan, Belle and Sebastian and Snow Patrol have come together to form Glaswegian folk duo Tenement and Temple. They were both, previously part of country-indie pioneers Thrum. The fruit of this partnership is their ten track, self-titled debut album.

The album opens with `Loving Arms` which highlights Monica`s vocal range which is almost choral at times. The song benefits from some simple but wonderfully effective guitar picking and some great backing harmonies. `I Know` is a song in a similar vein, this time very hymn like, quite cinematic. Again, the unassuming fretwork really compliments Monica`s awe-inspiring vocal range.

There is a vast, big production feel about `10 More Years`. It had some, what I felt were retro sixties vibes about it. A really different musical composition. The next submission `Your Sweet Face` was like a nostalgic trip in time, a delightful number that wouldn`t be out of place in a Patsy Cline songbook. A hark back to the age of innocence.

`Ripa` is an interesting track. It has a Portuguese / Spanish feel about it with Monica`s expressive vocals and some interesting bass baritone backing vocals and the clickety-clack of wooden percussion similar to castanets. There is even some faint whistling floating in the background.

I wasn`t sure what to make of `Only See You In The Dark` but it really grows on you the more times you play it and I came to the conclusion that it was a sort of number that you could imagine Doris Day singing in one of her many films. Readers of a younger disposition will have to trawl through social media to find out who she was.

`It`s Been A While Lord` is a more straightforward spiritual piece, a hymn like offering.I was brought back to my childhood in Ireland with `One Room House` a song that was typical of the slower type of waltzes played by the showbands at the annual county Fleadh Cheoils.

The penultimate track `Where The Wild Roses Grow` is a thing of beauty to behold. Again Johnny`s unfussy guitar work provides a platform for Monica`s voice to shine in all its glory. The album closes with a cover of the Rodgers and Hart classic `Blue Moon` a ballad that has been covered by a variety of artists from Billie Holiday and Frank Sinatra to Elvis Presley so an unenviable task, which with the accompaniment of fellow Glaswegian band The Strange Blue Dreams they pull of with aplomb. If there is one cover song that was made for Ms Queen`s voice it`s certainly this one. I can understand why Snow Patrol`s Gary Lightbody said she was one of the greatest singers ever and he`s no slouch in the vocal department.

This was a really different but enjoyable contribution from a couple of gifted musicians, who seem to really complement each other. It is very warm and mellow, but the unpretentious guitar work allows the vocals, which are at times haunting, unearthly and breath taking to really radiate. The nearest band I have heard to these are the Cowboy Junkies so a band to lookout for. This was a sensitive, uplifting and passionately charged offering that had me in all sorts of emotional states. A stunning debut, if ever there was one.

Previous article
REVIEW: THE HOLD STEADY – THRASHING THRU THE PASSION (2019)
Next article
IN FLAMES RAISE THEIR VOICES