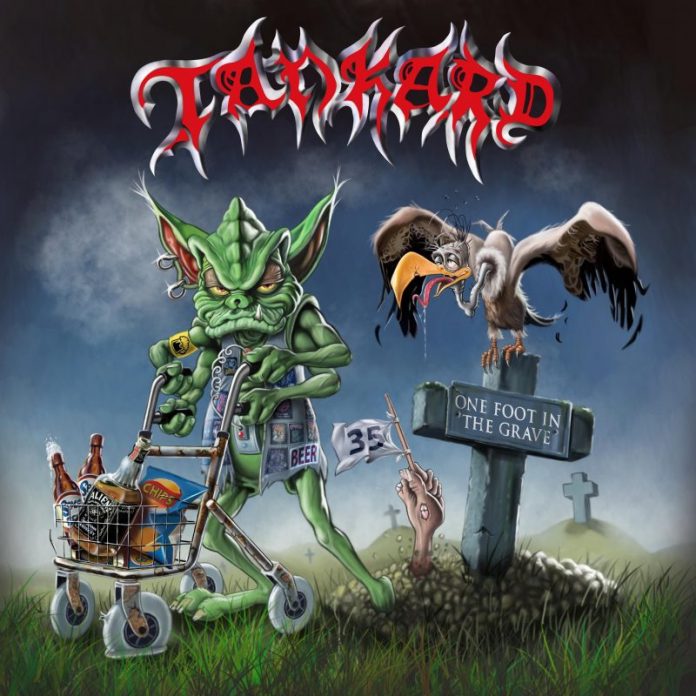 “Hop in your wheelchair, and feed the birds, let’s have a race on crutches…. senile with style, black leather diapers.”

The above is genuinely a verse in the title track for this, the 17th album from Germany’s purveyors of “alcoholic metal” and nowhere is the mood better summed up than in those words.

Because, what Tankard have done for the last 35 years, is exactly this. Namely, they’ve made vicious and nasty – yet gloriously tongue in cheek – thrash metal.

As kids’ reading Kerrang! In the mid-1980s MV would marvel at their album titles like “Zombie Attack” (this had a track on it called “Acid Death” if memory serves) and whilst the fact they are still going and we are reviewing the album only serves to remind both how old we are these days, then it is wonderful that the band are still here – and still pissing people off – deep into the 21st century.

There is barely an aspect of modern life that isn’t excoriated here. The vicious “Pay To Pray” (“I sold Jesus backstage passes” sneers Andreas “Gerre” Geremia). “Arena Of The True Lies” dismisses the social media generation as if swatting flies “(“like Gladiators in ancient Rome….you fight inside your home”) and they are nowhere near finished.

Those looking for PC would probably be best to look elsewhere. Tankard style themselves as the “guardians of non-conformity” on the almost punk “Don’t Bullshit Us!” and they live up to that epithet perfectly on “Syrian Nightmare” which, let’s say, deals with the Middle East peace process and “Lock ‘Em Up” which sorts out racism and the refugee crisis inside four minutes.

But, then, it has never been the job of thrash metal to be cuddly and warm. It is supposed to offend, and Tankard know exactly what they are doing.

In contrast to many of their peers they have never split and their line-up has remained relatively stable throughout the years, so there is a tight, thumping crushing side to songs like “Northern Crown (Lament Of The Undead King)” and the machine gun drumming on “The Evil That Men Display” makes that one a real highlight as it takes the millions of black metal bands to task.

Because its Tankard, there’s a good old-fashioned drinking song. Albeit one that decides to get all classical on our drunken asses before “Secret Order 1516” kicks in, and there’s one last foray into the moshpit for “Sole Grinder” – which is only designed so men who should know better can kick the crap out of each other while it plays.

Often, lazy reviewers (and we include MV in this) feel duty bound to write things about thrash making a comeback in things like this. And whilst that’s true in a wider sense, to say that here would miss the point. For bands like Tankard thrash never went anywhere – and no doubt they’ll be around to offend people off who deserve to be offended for the next 35 years too.

And that is something we can all drink to.