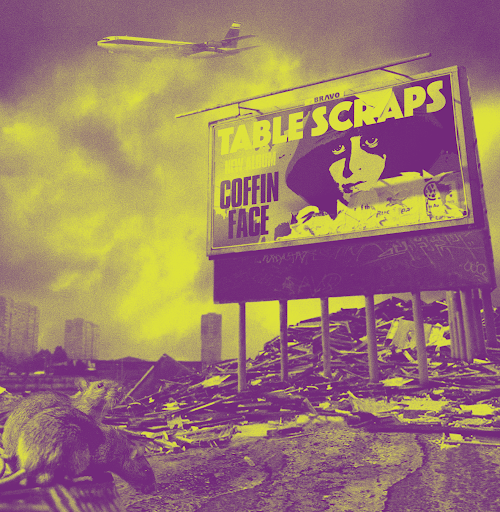 Their third album `Coffin Face` is released this month, originally conceived as a concept album in 2018, where a band emerges from the rubble of a post-apocalyptic event, the very real catastrophe of 2020 meant that the LP became a soundtrack to reality rather than something more fanciful.

The album opens with the slightly disturbing dystopian grungy doom ladened `Threads` which seems to relate to the calm before the storm literally. A community awaiting annihilation through a perceived nuclear blast, a slightly disturbing but ultimately compelling listen. There`s a much more psychedelic vibe to `Apology` which may well convey what may well be a subservient relationship. The later part of the track was driven by a delightful fusion of guitar riffs, thumping bass lines and a hypnotic drumbeat.

`Big Man` is a sort of heavy garage rock outing. It has a massive sound and vocals that sound as if they are shared through a megaphone at times throughout. We enjoy some blistering guitar riffs along route. It reminded me, for some reason of all the decadence of bands from the mid-eighties like Zodiac Mindwarp. There was a much lighter touch musically to `Judas Christ` but it still retained a powerful texture and again delivered some scorching guitar riffs, along with a mesmeric bass line and pounding drums.

`You Only Wanna Get High` has a retro psychedelic feel and could quite easily have fitted into the sixties West Coast scene along with Strawberry Alarm Clock, Quicksilver Messenger Service, Wendy and Bonnie and William Penn Fyve. We have a straighter garage rock out with the marginally unnerving and spellbinding `Never Liked It`

`God Of The Rainbow` is another trippy enchanting track that you can just let wash over and around you, a composition that will totally suck you in. Surf`s up with `Heat Beat` a submission that even Dick Dale would be proud of, a real toe tapper if ever there was one.

`Doom Generation` opens with an air raid siren and is a Zep-Sabbathesque stoner doom anthem for today`s crop of adolescents. We close out with the sixties tinged slightly melancholic `Heartache` a kind of lament of unrequited love.

I have to say I really loved `Coffin Face` with it`s raw fuzzed out garage come stoner / doom and at times psychedelic vibes and was taken aback by the overwhelming wall of sound that this three piece generated. It`s an album that seems to have currently taken over my life.

Give it a blast and i`m sure the same will happen to you.