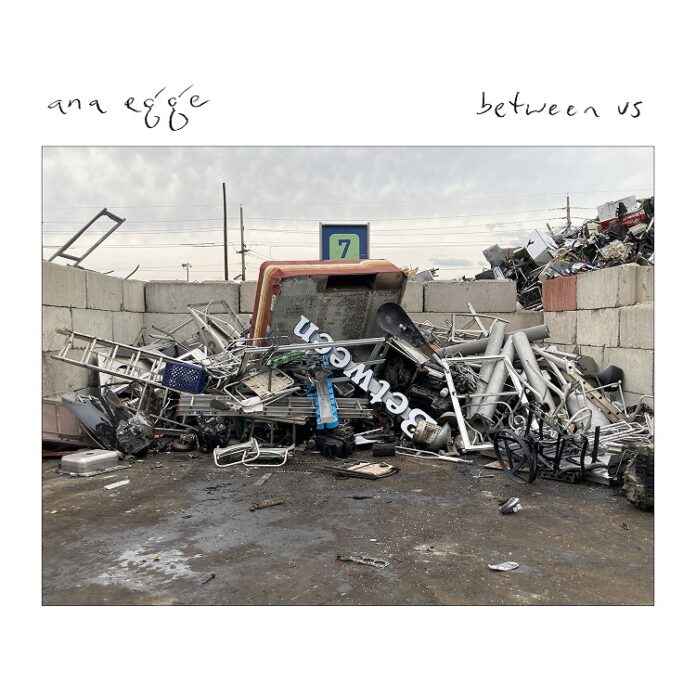 Ana Egge wanted to do something new and different for her twelfth album `Between Us` so during the pandemic she began collaborating online with Irish singer-songwriter Mick Flannery and nine of the eleven songs on this release emerged from these virtual sessions. The singer songwriter also started a dream journal after realising so many songs and melodies were appearing in her dreams. When she would become aware of dreaming about a song, she would wake herself up and hum the song idea into her phone. Her dreams, she reveals, were the genesis for many of the album’s tunes.

The album opens `Wait A Minute` a kind of jazzy slow burn that asks us to take five to listen to each other and maybe we`d have less to fall out over. We have occasional brass tinges and a dreamy saxophone which adds to the song`s laid back ambience. The singer has referred to the Cat Stevens song ‘Father and Son’ and has said that `The Machine` is more like ‘Father and Lesbian Daughter’. An interesting introspective and reflective musing on a strained relationship between an older parent and younger child. The rolling shuffling drum beat throughout was joyful.

The title `You Hurt Me` really says it all but this number is a tale of a troubled relationship which has obviously cut deep with lyrics that question what the narrator has done to deserve the pain inflicted. The heartache is almost tangible in the breathy vocal delivery. One of the dream diary songs follows with `Heartbroken Kind` a quite soulful reverie with a shuffling beat and dreamy sax vibe. It relates to somebody who can`t or possibly won`t move on from a broken romance as they are still in love with that person and seem to revel in thier anguish.

`We Let The Devil` is a complex offering musically, distant at times, bluesy at times, melancholic at times. The story of a couple who seem to just want to continue arguing rather that just move on with their lives. We have a much more intense edgy offering with `Don’t Come Around` a number that at times is quietly shared, enhancing the uneasiness and hints at some abusive conduct that has transpired for this liaison to have reached this unrectifiable level.

`Be Your Drug` has some delightful brass tones throughout, a light-hearted upbeat expression of that feeling when you fall head over heals in love with somebody and the whole world seems to revolve around you.  We have a powerful number written about racism with `Lie, Lie, Lie` and i came across a solo acoustic version of this on the net which added a further poignancy to this thoughtful number.

`Sorry` is a slow Americana tinged submission that reflects on the use of the word `Sorry` in numerous situations. We have a perfect Summer anthem with `Want Your Attention` which features Brooklyn–based singer/songwriter/arranger and performer J. Hoard on lead vocals and the singer`s seven-year-old daughter Roxy singing through a $19 echo microphone. A composition that`s all about catching someone’s eye and being desired. J. Hoard has a wonderfully rich vocal range and really syncs with Egge on the chorus harmonies.

The album closes out with `We Lay Roses` which was written with Grammy-winner Gary Nicholson as a eulogy for the singers nephew, who passed away in 2020. She hopes it can help people in grief “who are looking for a song about honouring someone and letting them go.”

A tender and touching tribute.

Ana Egge set out to do something new and different on this album and she`s certainly succeeded with the help of some talented musicians such as Jonny Lam (guitar / steel guitar), Michael Isvara Montgomery (bass), Jon Cowherd (wurlitzer, Rhodes, organ), Alphonso Home (trumpet), Sonny Step (sax), Darius Christian (trombone), Anh Phung (percussive flute), Jonny Lam (steel guitar/electric guitars). And J. Hoard (harmony vocals). Also, with the aid of Lorenzo Wolff who not only produced the album but added his guitar, synths, and piano skills. `Between Us` is a little different to what you`d expect from this artist but it works so well on so many levels. The song writing is as powerful as ever as is her vocal delivery, a slight change in musical direction yes but no less faltering in the quality of what`s gone before.