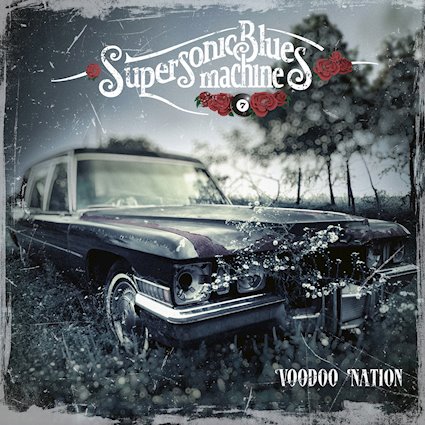 It must be tough for what is, essentially, a band with the message of “peace and love” to reflect 2022. That is exactly the predicament that Supersonic Blues Machine find themselves in. It is, after all, hard to get through a day without wanting to punch someone in the face.

All of which means that Fabrizio Grossi and the troupe are in harder edged mood than usual. As he says himself: “I’m not saying fuck flower power because that’s always the message. But there are very introspective things and a lot of the theatrics that we are dealing with on this record which I would say are fairly common in the blues but are dealt with a twist. There is a lot of Devil’s stuff in this record.”

And the different vibe to “Voodoo Nation” extends to something else that is perhaps even more important. Lance Lopez, the epitome of West Coast cool has gone, to be replaced by Kris Barras (who stood in on the tour, performing in a kind of half and half gig with the almighty Billy Gibbons). The end result of all of that is, to paraphrase the cliché. “The more things change, the more they stay the same” because whilst this is very much a blues record, its got a different feel.

“Money” kicks off the braver newish world (if you will) in a harder edged way. “There’s no crime in stealing, if you’re stealing big” spits Barras, and whether or not that’s the new slogan for corporate greed or not, it makes for a thunderous opener.

Likewise there’s a groove here that probably hasn’t always been about.  “Too Late” has a soul touch – check out the backing vocals – but it’s a soul from the other side of the tracks. It’s a fabulous singalong too, in fairness. Likewise, “Coming Through” has a funk, and my goodness, when Grossi lets himself go, there’s no one better.

What there is, as ever with SBM, is a raft of special guests. But what they do with the cast list is always give them that suits so well. It’s a real skill. So the Harlem Blues of King Solomon Hicks is given perhaps the best song here, “You And Me”.

Indeed, most of the rest have a “star” on. Josh Smith (Bonamassa’s producer and the man he called ‘probably the best guitarist on this stage’ at Royal Albert Hall in the Spring) cuts loose on the more urgent, Stones infused “Get It Done”, the incomparable Sonny Landreth slides his way through “8 Ball Lucy” and there’s no doubting the centrepiece. The State Of The “Voodoo Nation” you might call it. Eric Gales is a truly incredible guitarist and he proves it yet again on “Devil’s At The Doorstep”.

To be fair, often on a record such as this there might be a tendency to have it all about the guests and lack cohesion. That is not the case on “….Nation”. It feels like a “proper” album, for want of a better phrase. So that even when Joe Louis Walker takes “Is It All” to perhaps the most soulful place this goes, it does so in a way that feels comfortable rather than jarring.

Ana Popovic adds some real grit to “Do It Again”. A short, sharp snap of a thing, which is very much at odds with the gentle, sorrow filled “I Will Let Go” – one which shows Kirk Fletcher at his very best.

Perhaps pointedly, there’s no guests on the title track. Almost as if the band wanted to make a statement all of their own. They do. There’s a darkness here, but there’s a hope too. Something that the last one, the acoustic tinged “All Our Love” – a vehicle for Blackberry Smoke’s Charlie Starr – makes clear.

“Voodoo Nation” is a brilliant record, but one that still has a message. And maybe that’s the point of the collaborations. “We need all our love. It’s all we need to do to heal this world” sings Starr in the chorus, and on an album where so many disparate styles come together to make a whole,  is it proof that there’s still power in a union?