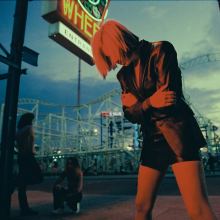 This release opens with `Who Put You Up To this?` possibly a denouncement or dismissal of a former lover but also a former self. It has a gentle lead in and evolves like a flower opening up. We have a sort of distorted bass line and breathy vocals throughout this dreamy quite  mesmeric nigh on self-analytical contemplative offering. There`s a constant drum beat at the heart of `In Flight` a song Kivlen wrote upon returning to his hometown after a long tour and feeling like the last young person left living there. It has some really sympathetic vocal harmonies between both singers and a really edgy kind of synthy backdrop.

`Otherside` is a quite simple offering with repeated piano keys and vocals and is at times quite ethereal but as it progresses it builds with a rapid drumbeat and twisted guitar chords before fading. We have a kind of observation on the so-called American Dream with `Roll The Dice`.

It was written in response to the Gamestop debacle, when a generation of basement dwellers bet their life savings trying to beat the casino of American capitalism, and in doing so, showed how untethered the stock market is to actual reality. It has a really grungy synth like vibe with both singers vocals almost reverberating off each other.

Title track `Headful Of Sugar has a slightly off kilter sound which becomes delightfully hypnotic with some complex guitar chord riffs and to me had a slight reggae texture.  I have to say I loved `I Don`t Have Control Sometimes` which to me tipped it`s hat to drum and bass merchants Pendulum and their `Propane Nightmares` track. Julia Cumming`s voice was almost edible.

We have more of a ballad with `Stand By Me` a fairly anthemic number which will have all the cigarette lighters and mobile phones lighting up an arena when shared live. `Post Love` is unashamedly an electronic pop number with rapid fire lyrics. Wonderfully danceable.

There`s a further disco sensibility with `Baby Don`t Cry` but with that kind of edge that alternative electronic rock band Garbage are renowned for. Nick Kivlen heads up the vocals on `Beat The Odds` and it`s an unashamed electronic rock out. The vocal delivery was to die for and so suited this track.

This release closes out with `Feel Somebody` and it`s a sort of grungy almost antagonistic challenge where the vocals move between dreamy and an almost hostile “what you gonna do about it” attitude.

Sunflower Bean are a band that are being talked a lot about at present and I have to say on listening to `Headful of Sugar` I can appreciate why. They have in Julia and Nick, two accomplished vocalists who shine alone or complement each other when harmonising. The unsung hero Olive keeps the engine room running as all three share a common vision or musical mission.

Although the album runs at just over thirty five minutes, there`s plenty of variety shared to keep you satisfied. I`d encourage you to allow Sunflower Bean into your life to brighten up your day and give you that euphoric head rush.