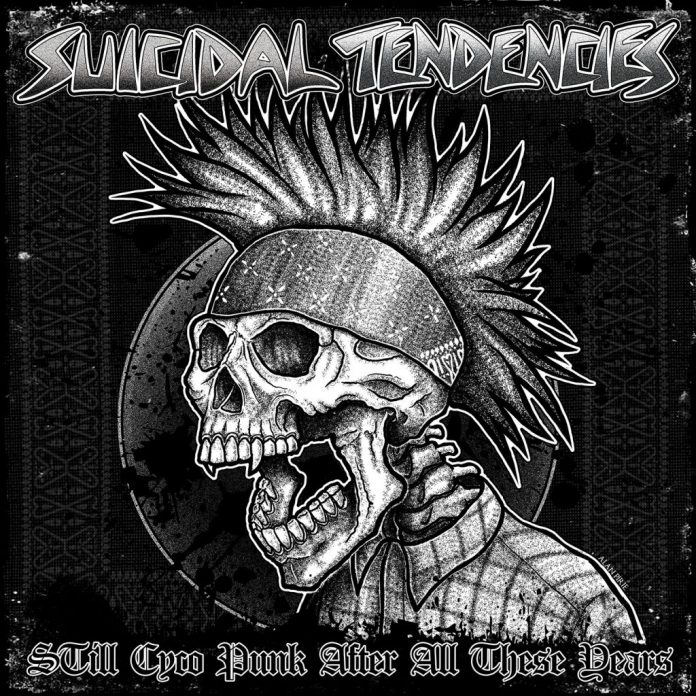 Point one: violence isn’t the only option – till my fist hits your face.

Point two: still Cyco punk after all these years

Point three. “And the irony is a “non-Suicidal” album, has just made me more Suicidal than ever.”

That holy trinity holds the keys to the pandora’s box that is this new record from Suicidal Tendencies.

We’d be best off taking them all in turn.

The first thing is the very first line on the record from the crossover thrash, with a side order of violence that is “I Love Destruction” – which proves that everything is in order as normal on album number 15 from Mike Muir and the boys.

Except – as point two alludes to – this isn’t a conventional ST record. It is, instead, a “reimagining” of record that Muir put out in 1995 under the name Cyco Miko entitled “Lost My Brain….Once Again”. The new moniker is a take on their own record from a year or two before  which re-recorded their own debut.

Which brings us to point three.

And thanks to Lombardo, the damn thing crushes. Like – dare I say it – Slayer playing punk if you will.

What with that and the bass groove the 11 songs here aren’t taking no for an answer – and even better, although they are played by the current band, they are very much of their time too. Which, when you think about it, and think about the godawful pop punk that infected the airwaves then, is quite a feat.

Or put another way: the only time this would ask you your age again is to see if you needed consent for your medical treatment after it had put you in traction.

“FUBAR” is rollicking, and dumb, fun. Beavis And Butthead would approve and in the spirit of those two (the single greatest reviewers on the planet) this does not suck and will make you want to break stuff.

Better still is “All Kinda Crazy” which as well as being exactly the sort of stuff CKY will probably copy next time around, contains the immortal line: “you see violence, I see fun.” Toxic Waltz by Exodus updated, to a degree. And when this hits the moshpit, brother, get gone.

“Slipping Away From Insanity” is proudly wearing its hi-tops and sounding like Anthrax did before they got all grown up. “It’s Always Something”, in its current guise combines a Sabbath like opening with a genuine malevolence, while former title track “Lost My Brain…Once Again” now starts with a solo and is a real chugger.

It is striking that even the ones that might, in other hands, be a little bit of filler – and “Nothing To Lose” might come into this category, sound like they crackle with energy and all have choruses and hooks that never belonged to a side project.

Some of the songs are more complex than your conventional punk knockabout too. “Gonna Be Alright” has as many time changes as a Wildhearts B side back in the day, there is a real storm whipped up by “Ain’t Gonna Get Me” and Lombardo’s take on “All I Ever Get” turns that one into basically The Damned gone thrash.

“Save A Peace for Me”, the closing number, is arguably the most interesting. Six minutes more or less of mid paced rock n roll, until it switches gear with a genuine Judas Priest-ish riff, it shows perhaps that Muir always had more strings to his bow than he let on, and now on this souped-up collection he gets to prove it in a band setting.

The days where he was getting visits from the secret services, the riots and the trouble might be behind them, but there’s life in these old dogs yet. Reaching back to the past has surely guaranteed their future.