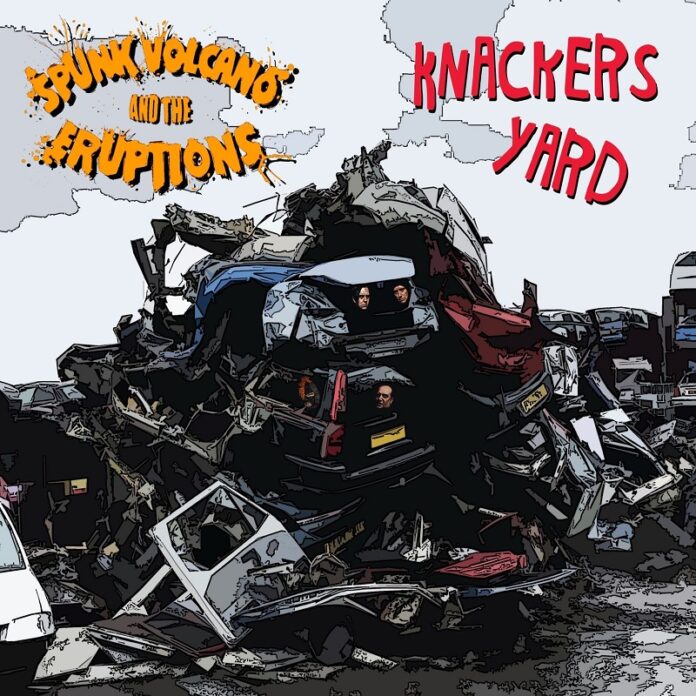 Over the last few years, it is the firm belief of this website that Spunk Volcano and the Eruptions are one of the best punk bands in Britain.

The difficult bit is that I am now meant to explain to you why “….Yard” is as stunning as the others. The temptation is strong to just write “cos it just is” then in a homage to Homer Simpson add in a few “screw Flanders” but Maff Fazzo (the bands drummer who emails me this stuff) probably expects more so, lets do a test.

“I’m fucking telling ya, I am fucking fucked, I don’t think I’ve ever hurt this much”. Does that a) offend you or b) resonate with men of a certain age who can’t get out of a chair without making a noise.

If you went for a) we’ll see ya later. However, if you plumped for b) then welcome aboard, you’re one of us now.

That line is the opener on the title track. Northern punk that sounds like Ken from Ferocious Dog has gone on a bender for five days and joined the Hells Angels. It’s also typical of what they do. Perceptive in ways you never imagined.

“I’m A Capsule” the opener, sets itself up for a scrap. It doesn’t even care who with. “People are” concludes Spunk himself, “fucking awful.” And when you see the person coming second in the Tory leadership race wants to arrest people who “vilify England” and he’s losing to Thick Lizzy, an almost literal fascist, then its hard to disagree.

Whether SV and the Eruptions agree, who knows. They’ve got tales from the estates to tell. “It’s All Kicking Off” observes a fight and enjoys itself, “Job Opportunity” laments the fact that you can’t steal Car Stereos anymore as they don’t exist – the struggle is real – so you “sell cocaine by the swings” instead. Quite.

You can have all sorts of fun with SV, but to be serious for a second, they are brilliant songwriters. I honestly believe that Chas And Dave are amongst the finest lyricists we have, and SVATE are up there with them for the way they use words. You’d say they were like Sleaford Mods for the way they document working class life, up to a point. Because try as I might I don’t remember Jason Williamson writing a song about serial killings, which appears to be what the thrash of “Madhouse” concerns itself with.

“Menky Man” brings us back to earth with moshpit inducing hi-jinks, before “Mordrake” is almost a ballad. Like “Madhouse” its lengthy too. This is not your conventional punk rock band. Even “Pit Bull Facelift” which is short, sharp hardcore manages to sound a world away from Cro-Mags.

“My Tears Get Washed Away” displays a gift for melody and could have been on the latest Wolfsbane record with comfort. “Morphine” couldn’t, but it helps with the pain, I guess.

There’s a pathos about the last one, “Dead In The Mirror”. “Scared of life, scared of death, scared of most things” is a rather more sensitive line than you might have assumed from a band that is on the face of it so in your face. But that’s why Spunk Volcano And The Eruptions work, and that’s why their albums are so consistently superb.

Here’s another to get ….excited about. It’s all cracking off in “Knackers Yard”.

Previous article
PAT DOWN
Next article
BAND OF THE DAY: JOKERS HAND