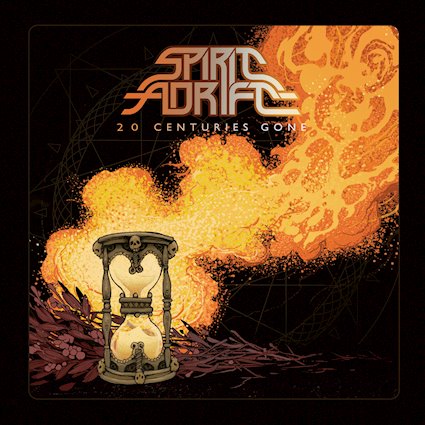 The loss of the CD single: I am not sure I ever got over it, I am not sure I’ll forgive the internet for it (it is, as previously stated, the official stance of this website that the internet is rubbish and everything was better before it’s existence).

I love those things. Some of my all time favourite bands even saved their best songs for them. I even discovered bands through them back in the day (“Do Anything You Wanna Do” by Eddie And The Hotrods was an Almighty cut, and “Lazy Sunday Afternoon” by The Faces, I first heard on a Thunder single).

Maybe this will do the same for Spirit Adrift fans. “20 Centuries Gone” is the sort of thing that in the late 90s, before Google ruined everything, that would have been Bonus Track material. Two new songs from MV’s favourite metal band of this decade (it might sound like a big call, but they are majestic and I am truly gutted I haven’t seen them live yet) would be good enough to get me salivating – and they are stunning.

The first of them “Sorcerers Fate” is – according to the main man Nate Garrett – the genesis for the project, given its line about new and old aligning, but to me, like always, they’ve taken everything that’s cool in metal from Maiden, to Corrosion of Conformity, to Dream Theater and a pinch of thrash and distilled it into one track. It’s an incredible feat.

The other new one is just as good, and perhaps a little more sprawling. The way they do things is like no one else, and the way the solo screeches, before the hook of “everything must die” and a closing riff that even adds a bit of Pantera (of which more…..)

And it comes as no surprise that a band with that much going on has diverse influences, which is handy as there’s six covers here. The beauty of them all is that they sound like the originals, but being done by Spirit Adrift.

“Everything Dies” by Type O Negative (a band I saw back in the day and don’t think I appreciated how lucky I was to do so) is genius. And they pay suitable homage to it before giving it a twist.

They do that with all of them. “Hollow” from Pantera, is has the SA dust sprinkled over it liberally, before the ending slab is pure Dimebag, and the way they take on “Escape” by Metallica is equally impressive (and makes me wish I listened to Metallica more, in honesty).

The three remaining ones are right in my ball park as three of my favourite bands. “Waiting For An Alibi” is simple proof that Thin Lizzy are the greatest hard rock band ever, and even here, with a little more metal in the mix, a little more meat to the chords, it’s still evident.

I have to be honest, I maybe didn’t have Spirit Adrift as fellow travellers down the ZZ Top road, but “Nasty Dogs And Funky Kings” rather suggests otherwise, and even if they’ve added a little more fuzz to the guitar than the Rev Billy F Gibbons, then there’s no mistaking it. As there isn’t with “Poison Whiskey”. They’ve amped it up like CoC on “Deliverance” and they’ve chosen one of the bleakest songs in Skynyrd’s catalogue, but my, they’ve nailed it.

Spirit Adrift nail everything they do. They are the best for a reason, indeed the only thing missing from this? Me parting with a couple of quid in 1998 to buy it as a four track cd single. Otherwise, bravo.