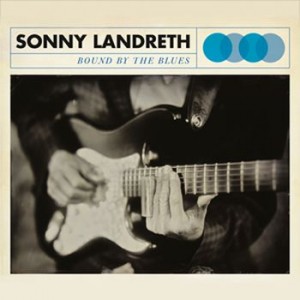 Over the past 50 years there are not many blues musicians that Landreth has not influenced or been influenced by. His ability as a slide guitar player is without rival. He has collaborated with legends like Eric Clapton, Mark Knopfler and the late Johnny Winter.

He is revered in the Blues community from stints with John Mayall and John Hiatt as well as an impressive back catalogue of solo releases, and this latest album merely confirms why he is so highly respected. What he currently lacks in the Clapton/Knopfler global awareness stakes he makes up for in drive, talent and a lack of regard to fads, scenes or commerciality.

“Walkin’ Blues” kicks things off with a bottleneck loose strut that exemplifies his much vaunted talent. Robert Johnson’s original was very much a stripped down affair and whilst Landreth is keen to keep the feel and authenticity he cannot help but add his considerable sliding sparkle to this modern version which gives it a fresh energy and purpose.

There are a number of well-known tracks on the album such as the classic “Dust My Broom” which is a hard song to do badly even by mediocre players but it takes on a more rocking feel to it in his cultured hands. From Howlin’ Wolf to Elmore James to Steven Seagal, every bluesman has given the world their take on this legendary track. Landreth’s personal interpretation stands alongside the best.

Whilst peppering the album with some of the genre’s finest cuts it would be easy to miss the handful of Landreth originals which mix seemlessly with the better known tracks. For every “It Hurts Me Too” and “Key To the Highway” there is a stunning original effort like “Bound By The Blues”, a brilliant example of how Landreth manages to encapsulate what the Blues means to him whilst also paying homage to the genre’s durability and flexibility in these constantly shifting times.

Johnny Winter himself would have been proud to have the track “Firebird Blues” dedicated in his honour. It’s a slow and deliberate blues ramble that showcases much of what the man is about. Pure blues intensity and character that cannot be faked or copied. It’s either in you or it isn’t. It’s fair to say that Landreth has it coming out of his fingers.

Folk, Country, Jazz are other styles that Sonny Landreth has excelled in but it’s clear from this album that the Blues remains closest to his heart and whilst originality for the modern Blues musician is a somewhat tricky task to pull off considering the dominating familiarity of the style, tempos and rhythms the best one could hope for is that the artist makes the Blues his own. Take it away from the generic signatures and stamps his, or her, own authority and personality on it. He achieves this with consummate ease.

It’s always a bit tricky to rate album that have so many cover versions on it, take Joe Bonamassa for example. I doubt there is another genre of music that requires it’s modern day players to pay homage quite so religiously. Sonny Landreth has spent many years in the Church of the Blues and it shows.

For more information on Sonny Landreth head over to:

Bound by the Blues was released on 8 June via Provogue/Mascot Label Group.