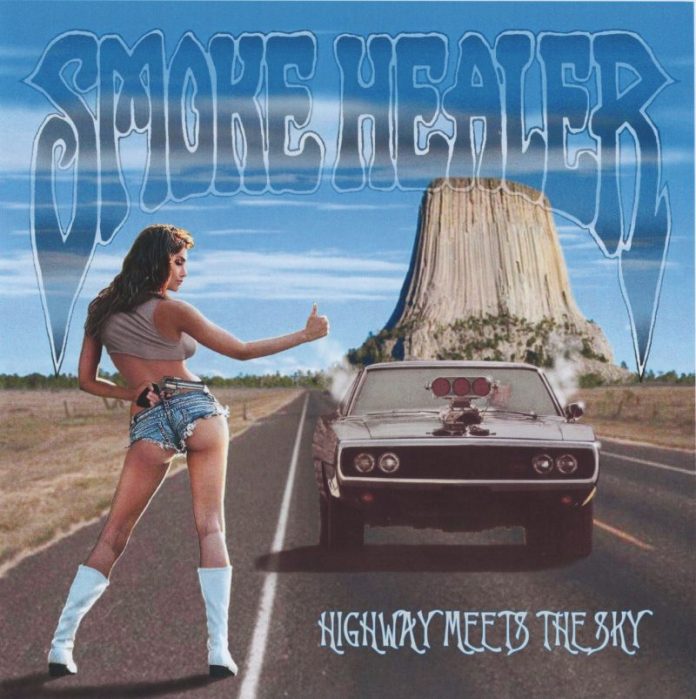 One we might have missed last year. Don’t miss it now.

Ass, gas and cash, nobody dies for free…

Those are the last words on “Death Proof (Hell On Wheels)”, the last song on “Where The Highway Meets The Sky” and as you might have guessed, it is a rip-roaring affair. So rock n roll is this song in fact, that if Lemmy himself was singing it. While swigging Jack Daniels. On a Harley. Racing towards a burning building at 100mph you might get somewhere close to its majesty. In plain English, it is like Zakk Wylde has joined the aforementioned Monster Magnet for the most fun jam ever.

If that’s the best of the five full length songs here (there’s a strange instrumental too) then the rest ain’t too shabby either.

As you’d expect from a band with two guitarists – one of whom glories in the name Chuzz McBuzz – this has got quite a punch about it. “Fungustus Villa” is a deep-fried slab of riffery, but this isn’t one of those records that thinks the only place to be is listening to Kyuss with a bong. Instead the five piece have a thorough understanding of 70s classic rock and soaring melody.

“No More” has a bit of Scorpion Child about it, as Dan Ryan, the band’s singer, stamps his authority all over the thing, while “Medicine Man” allows their southern roots to shine through (the band is from Hebron, Kentucky) but this isn’t anything like Skynyrd or Blackberry Smoke, this is southern rock the way it might sound if Black Stone Cherry listened to Alice In Chains first couple of albums then got really riled up. Bass player Brooke Smith provides a meaty base for the track and it fair old swings.

Believing (rightly) that there are only two sorts of music, rock and roll, Smoke Healer have a kind of slam about them. “Wastin’ Time” has a quite superb guitar sound and is absolutely insistent that you will like them – or else! “If you’re waiting for the race to start, well then you’ve already lost” seems like more than a throwaway line here. This is a band with much to do.

And that is even before the last song has convinced that this is the realest of real deals.

“Where The Highway Meets The Sky” deserves to be so much more than a hidden gem. It is the sound of a band heading for the fast lane. A smoke signal of intent, the healing powers of rock n roll (as The Supersuckers might have said) are never more in evidence than here.