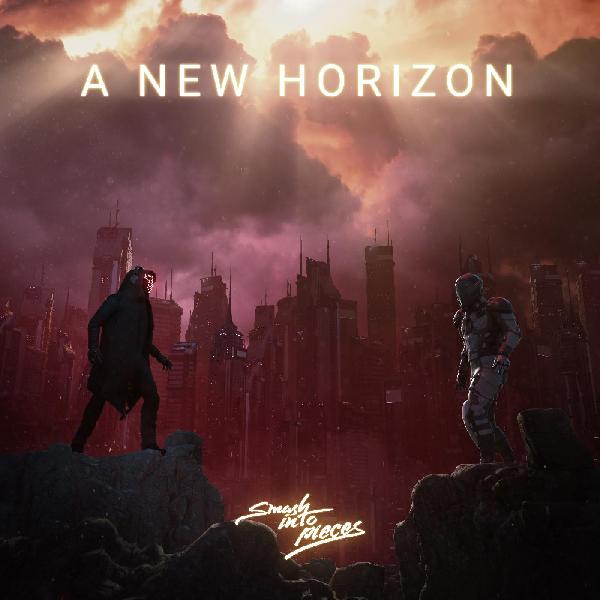 Smash Into Pieces are a modern arena rock band formed in Örebro, Sweden and now comprise Chris Adam Hedman Sörbye (lead vocals), Benjamin Jennebo (guitar, bass, vocals), Per Bergquist (guitar, bass, vocals) and The Apocalypse DJ (drums). The band release their sixth album this month with `A New Horizon` which continues and concludes their ARCADIA World narrative, a story that they began to detail on their previous record Arcadia. It`s a futuristic world riddled with political corruption and driven by fear and misinformation, the landscape is a mirror image of reality.

The album opens with `Rise Up` which seems to be a tale of reawakening. The song seems to have that calm before the storm feel to it, as if it`s about to blow but is being held back. Again `Real One` alludes a tension of restraint. Another track where the narrator seems to be discovering their purpose.

`My Wildest Dream` is a sort of mid paced rock number that possibly relates to whether the lines between fantasy and reality are blurred. There was a more stadium rock sense to `Bangarang` with pounding drums, guitar riffs and unrestrained vocals.

`Broken Parts` is a ballad like offering initially before becoming more anthemic at the chorus whereas `Cut You Off“ is a stadium ballad where i`m sure there`ll be lighters and lit cell phones being held aloft when aired live.

There was a harder edge to `Glow In the Dark` which had some rock out moments. We return to a more mid paced anthemic vibe with `Running Away From Home` with pounding drums, guitar riffs and a lavish vocal delivery.

`My Shadow` seemed to open with vocals shared through a vocoder and becomes quite grandiose as it progresses. We have a more electronic texture to title track `A New Horizon` which bounced along and had a brief saxophone solo towards the end.

The album closes out with `Outrun` which was an instrumental number that had a feeling of the end of the world or aftermath of an apocalypse.

Smash Into Pieces, I have to say are a talented group of musicians with a singer who has a rich and varied vocal range. This album had its moments, but I always find it difficult to engage with concept albums unless you buy into them. There were some epic pop rock come alternative metal numbers here and I can kind of see what the guys are trying to achieve. This album appears to be the conclusion of this concept so it`ll be interesting to see what they have to offer next.