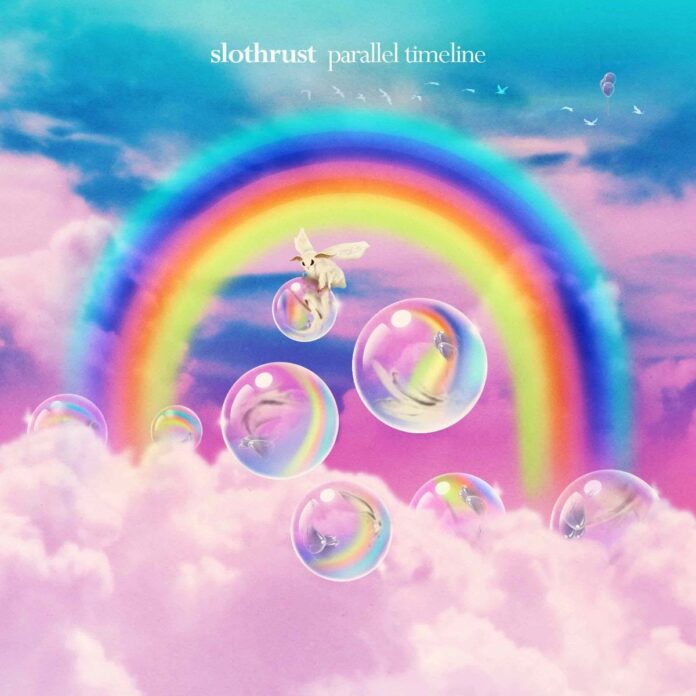 Slothrust is an American alternative rock band from Boston, Massachusetts and consists of Leah Wellbaum (vocals, guitar), Kyle Bann (bass) and Will Gorin (drums). Their fifth studio album `Parallel Timeline` is released this month where bandleader Leah Wellbaum pushed herself to try and understand her own spirituality on a deeper level, putting a lens on the core wound of the human experience, the idea that we’re alone. She explores the feeling of being trapped inside her own consciousness while simultaneously searching for a meaningful connection to the universe, and all the mysteries it contains.

The album opens with `Cranium` a quite hypnotic slow burn with a quite devastating guitar solo towards the latter part of the song. The guitar solo was inspired by Funkadelic’s ‘Maggot Brain’ where George Clinton told guitarist Eddie Hazel during the recording session to play as if he had been told his mother was dead. We move to a full on fast paced rock offering with `Once More For the Ocean` where the lyrics are blasted out against a backdrop of some grungy guitar riffs and the rhythmic sound of cowbells.

`Courtesy` is a quite compelling introspective dream like presentation with some delightful vocal backing harmonies. Halestorm singer Lizzy Hale joins Leah on `The Next Curse` a song that relates to the climate control crisis threatening our planet. It starts quietly before bursting into life with grinding guitars and becomes wonderfully anthemic. There`s a spoken word passage midway through which really adds to the overall intensity.

‘Strange Astrology’ is a stripped back love song dedicated to the singer`s girlfriend of six years that ruminates on astrological compatibility. We have an almost self-analytic piece with ‘Waiting’. A quite otherworldly track that imagines the idea of wanting to heal yourself but not knowing how.

`King Arthur’s Seat’ is a mid-tempo ballad that was inspired by both Scotland and Billy Joel. The singer has shared that it relates to “the feeling of being alone and separate and not really knowing what to do with that”.  We have a further gentle dreamlike acoustic track with ‘A Giant Swallow’.

`White Rabbits` is a powerful submission which builds in intensity lyrically and musically as it progresses.  A song of quite possibly breaking free from self-perceptions previously held. The album closes out with title track `A Parallel Timeline` which to me had gospel like elements quite similar to U2`s “I Still Haven`t Found What I`m Looking For”

`Parallel Timeline` is an intense and potent listen. The songs seem to have come from somewhere deep within the singer and are a little surreal lyrically at times but i`m sure must have been extremely cathartic. It`s the sort of album that you can return to again and again and discover something fresh each time.