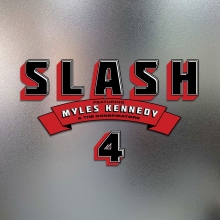 There’s sometimes when all you can do is suck a thoughtful tooth, and go “damn!”

“4” gives away that this the fourth album from Slash Featuring Myles Kennedy And The Conspirators, then you think to yourself, ‘well yeah, but yer boy Hudson, he only stuck five out as part of GnR. Now, when you consider the whole Slash’s Snakepit thing, and the “Slash” album that spawned this conspiracy with Myles Kennedy, maybe its time to switch your thoughts to the fact that Guns is his side project these days.

Whatever, you can’t get away from the fact that Slash is basically the living, breathing embodiment of hard rock. In the late 80s he was the most dangerous thing on the planet, these days he’s just a kind of virtual mate, with his riffs and his leads and his ability to still sound like he’s playing in the coolest rock band around.

“4”, in many respects follows the same kind of formula as his other work over the last decade or so. There’s a killer opener, “River Is Rising” merely follows on from the likes of “World On Fire”, then he – and the rest – push the boundaries, but he still sounds like Slash, and Kennedy still sounds like Kennedy.

Regular readers will know this, but for anyone who isn’t familiar with these pages, let me state it once more. I am not, never have been, and never will be anything approaching an Alter Bridge fan, that said, as a singer Kennedy is perfect for this. “Whatever Gets You By” is typical of what they do. It sounds like neither, but still sounds like both, and the way slash rips out that lead is joyous.

There’s a talkbox on “C’est La Vie” that the 10 year old Bon Jovi fan in me can’t resist, and it’s a mid-paced rocker of skill (and yes, you can argue, it should be given the personnel) but somehow, everyone (and this really is a tight band, Todd Kerns on bass, Brent Fitz’s drums and Frank Sidoris – who was relatively unknown before this gig – on rhythm guitar are as good as it gets) is happier when the handbrake is off, such as on the brilliant “The Path Less Followed”.

The versatility of this strikes you, “Actions Speak Louder” has a bit of a Stones thing in its looseness, while there’s the odd Asian flavour to “Spirit Love” as everyone stretches themselves.

“Fill My World” (a song written from the perspective of Kennedy’s dog, apparently) is an interesting one. Singing in a falsetto voice as opposed to the usual roar is cool, but I can’t – surely – be the only one who is picturing “Sweet Child O’Mine” as it opens?

Arena rock just comes naturally to them, at this point I suppose, and “April Fool” is just that – its not dated and that needs stressing, it’s just a load of blokes doing what they were put on this earth to do. “Call Of The Dogs” is a proper sleaze fest, though and it’ll take everyone back to the Rainbow on Sunset Strip whether they were there or not.

Whilst this album does not suffer from the thing that one or two of this bands previous records have, and be bloated with a little too many fillers, it does save its longest for last. “Fell Back To Earth” is a thunderous ballad too. There’s a bit of Aerosmith about it, and its classy, but possibly things might have ended on a more upbeat note?

However, who am I to tell Slash how to sequence a record? Especially when, in every respect, “4” is a very, very good one. Lest we forget that he doesn’t have to do this, but he does need to, and that’s very different. That sense of fun and creativity shines through.