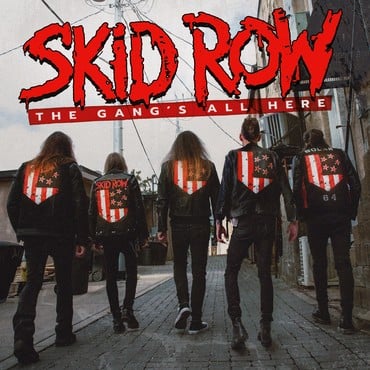 “Tricky little Vicky was the only girl he trusted”. Skid Row: The Gang’s All Here – 2022

It’s not just the words, it’s the knowing laugh from Erik Grönwall. It all adds up to one thing: Skid Row, baby. They’re back.

Skid Row will always be my first time. November 20th 1991. Birmingham, NEC. They headlined with LA Guns and Love/Hate in support. It was the first proper gig I’d been to with my best mate (still my best mate, and we still 31 years later share the passion, as our excitable texts about Iron Maiden playing live today will attest) and my God. I am not sure there’s any way I can explain the moment when they came out on stage.

They were our favourite band at the time. We’d been through the Bon Jovi stage, and now we wanted danger. We found it.

Enter the present day: I am blocked on Twitter by their then singer (I think for reviewing a gig with one of their later singers. Either that or he’s just a bellend…..) and the band are about to release their first album for 16 years.  I could be glib here and say its their first full length record since “Subhuman Race” in 1995, but “Thickskin” had its moments, “Revolution’s Per Minute” was pretty good and the brace of EP’s they put out in 2013 and 14 were good too.

What I will say, though, is that if you want Skid Row to sound like those first two albums, step right up, they’ve got it sorted.

And for that you can probably thank Grönwall (or Producer Nick Raskulinecz, who grew up with the band too). Gronwall was the singer in H.E.A.T (the last time I saw Skid Row, they were one of the support bands), he was on the Swedish version of Pop Idol singing a SR tune in 2009, and frankly – as good as Jonny Sollinger was and as hard as ZP Theart worked – this is best singer they’ve had since the one who blocked me.

The first song on “…..Here” will tell you that. Listen to him roar on “Hell Or High Water” and tell me that he’s not enjoying this more than you are. Also tell me that the band don’t sound totally reinvigorated (or that it doesn’t bare a ….ahem …..passing resemblance to “Livin’ On A Chain Gang” from their second record).

And that, pretty much, is that. The title track knows it sounds like 1989. It knows everyone who loved them then gets the “Tricky Little Vicky” here thing, but it my goodness, it’s fun.

Maybe its because the core DNA of “Snake” Sabo, Rachel Bolan and Scotti Hill are still here, but there’s an energy to this that screams originality. “Not Dead Yet” is infused with the punk spirit they always had, “Time Bomb” has a groove, a menace and you wouldn’t want them living next door again. Which is how it should be.

“Resurrected” (you don’t have to think too hard to find that it might be about them, after all) has a more “mid period” Skid Row about it, and their harder edged more “metal” sound is explored on “Nowhere Fast”, all of makes “When The Lights Come On” even more fun. I won’t be the only one who listens to it and goes “that’s the same bassline as “Piece Of Me”, but its rollicking fun. Glam at its finest and a chorus they have to inject you to resist.

“Tear It Down” you can see in the live set. Gargantuan. Arena rock? Yeah, even if you’re not playing them anymore you can still have the intent, right? And fists in the air? Oh go on then. “October’s Song” is the ballad. But its not “I Remember You”. It’s a seven minute almost Prog Epic that has more to do with Dream Theater than you’d imagine. Cool, however “World On Fire” is better. Because it suits them better. Racing down the freeway with its middle finger to anyone in its way. It gives “The Gang’s All Here” the send-off it deserves.

Don’t make the mistake that because the band means so much to me that this is some nostalgic, rose tinted bullshit, either. Rather, there are some genuinely brilliant songs here. Genuinely brilliant Skid Row songs, at that. You see, rather like Guns N Roses over in the West Coast scene, Skid Row were never a glam band, they were the best hard rock outfit of their generation. This is the closest they’ve been to recapturing that in 30 years.