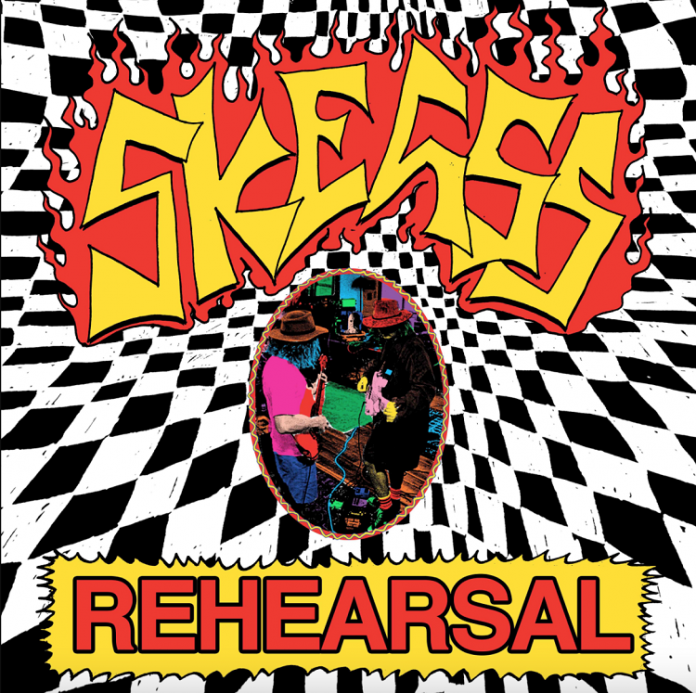 To label Skegss as an Aussie surf-punk band, as some have, would be doing them a disservice. This trio Ben Reed (singer/guitarist), Toby Cregan (bass) and drummer Jonny Lani originally from Byron Bay, New South Wales have been around now for six years. They have a new album `Rehearsal` recently released where the lyrics are inspired by stand-up comedians and reflections on youthful romance. The album was recorded using vintage gear from the ’60s and ’70s.

The album opens with `Down To Ride` and it`s a guitar driven slice of indie pop and to me much in the vein of British bands like The Coral, The Courteeners or The Rifles. A delightfully upbeat introduction that did have a slightly retro beat sound.  There is, I have to say a more surf vibe to `Valhalla` a place described by Old Norse sagas and texts as a realm of the Norse afterlife that Vikings aspired in life to enter upon their death, in a sense similar to the Christian concept of heaven. Another upbeat slice of joy. These guys version of  Valhalla is loads of food, beer, and buddies.

I loved `Fantasising` it was such an uplifting number that gave you that “all is well with the world” feel and will put a smile on your face. We had some nice guitar riffs to enjoy alongside some pounding drumbeats. If this is daydreaming, i`m all for it. There was a more reflective texture to `Running From Nothing` a quite introspective mid paced composition with an intricate guitar solo shared towards the end.

`Bush TV` races along and has that Green Day punkish sound with catchy chords and sing-along lyrics, especially the chorus of “wait until you miss me” A tale of how a little time away from a partner can make the relationship stronger. I can see the semi acoustic `Picturesque Moment` being a number that will have the faithful singing along in a live setting. It could almost be a Country tinged sea shanty and has some what I think was harmonica tinges and a tambourine shook at the death. Great stuff.

`Under The Thunder` is another interesting cut. I has a sort of seventies swagger about bit with funky guitar riffs and vocals that sound like some American stoner reciting them. Singer Ben relates “This song is about enjoying the rollercoaster of life, no one can live forever so you may as well enjoy the seasons”. There`s a curious sound to `Sip Of Wine` with rolling drums leading us along with driving guitar riffs and vocals that seem almost reluctantly shared. A slightly strange but compelling submission.

`Curse My Happiness` is an oddly ironic title and the track is quite fascinating with some complex guitar chords, harmonising drumming and vocals that had a sort of melancholic edge at times. The song had me in mind of seeing Nirvana on MTV and performing `Jesus Doesn`t Want Me For A Sunbeam` for some reason. A strummed guitar and piano keys lead us through `Wake Up` a deep and contemplative piece that reminds us that it’s okay to block out the chatter and heed your own conscience. As the singer conveys “you’re allowed to change your mind and not let anyone make you feel bad about it.”

`Savour The Flavour` returns to the melodic new wave, power pop feel good factor of the earlier part of this release. A really catchy offering again with some hummable lyrics. Just as memorable but a little more laid back is `Fade Away` that has a sort of slacker feel to it. The guitar and drums drive this along with lyrics almost screamed at times.

We close with `Lucky` a sort of stripped back anthem that seems to relate to that someone special in your life. We have acoustic guitar, vocals, whistling and a melodica, What more could you want??

I really loved Skegss and `Rehearsal`. There`s a real warmth, a real joy about them and their music. It would be too easy to write them off as a good time surf punk trio. But some of their lyrics are quite serious and introspective, especially coming from such young guys. But that aside if you want an album to put you in a carefree frame of mind and have you dancing around like a muppet, these are your boys.