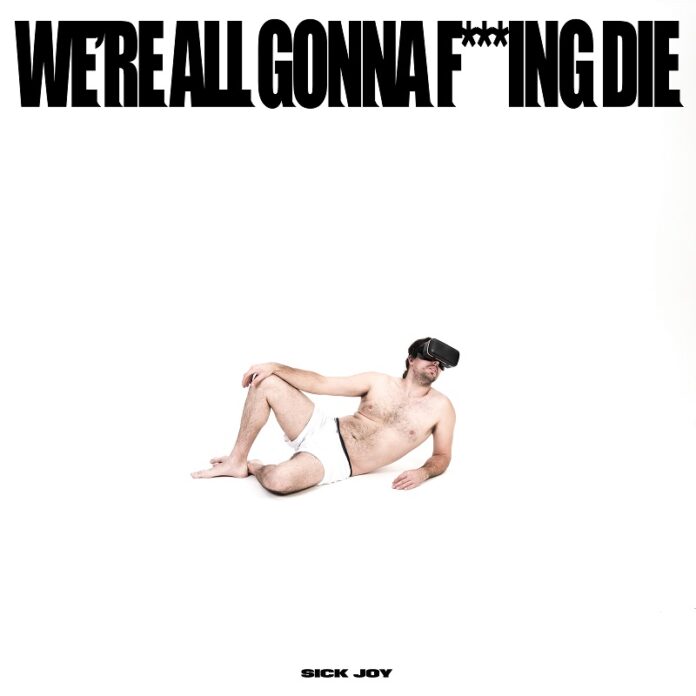 Sick Joy got me funny looks in a work meeting. It had seemed innocent when I was asked to password protect a website we hadn’t put live yet. I did what I always do. Used whatever song I was loving that day and a random selection of numbers and symbols based on football.

Fast forward a fortnight and I the Chief Exec says “what’s the password? And I am in a room of 20 people going “Vibe Sucker etc etc”.

So cheers, lads.  It’s your fault for having a song as good as that one. It was the lead track on their astonishingly good “Them Days” EP. A 4 tracker so good that people like me who love finding new things immediately tell everyone about.

“We’re All Gonna F***ing Die” is their first full length and it’s as innovative, fuzzy and original as you’d hoped and imagined it would be.

You read the title of the record and you think ‘ooh this be a tough slog’. In actuality it’s a pretty hopeful thing. Like, we’re all gonna die, so lets enjoy it. The opening track “I Don’t Feel Like Dying” (it tempers its optimism with the thought “at least not today”) is the type of big, ambitious, widescreen rock that has marked them out for a while. Former touring partners of the likes of Feeder and Dinosaur Pile-up, its sort of in the middle of the two.

“Talking To The Drugs” is a crunchier, more energetic thing, and its catchier than it should be. “Stay Numb” might be the gem, though. The one that you’d play to convince everyone that you had found a band that they should love as much as you.

What is interesting about the three piece is the way they’ve expanded their sound over a full 45 minutes. “Deep Dream” is sort of woozy, but the solo shakes, and Mykl writes songs in his own way. “I’ve Got More Than I Need (And I Don’t Have Much)” is – like a lot of these – rooted in a kind of 90s trip, but still has a modern feel. Settling for what you’ve got, though, doesn’t necessarily seem like the bands motto, despite what the title says.

Instead, even the slow building, brooding ones like “Alive On The Inside” come in with a bet of menace, a bit of intent, and there’s an odd kind of outsider feel to “The Blood And The Bliss” and its glammed up sound, that suggests that Sick Joy think if they’re going to take the mainstream then they’re going to do it their way.

That feeling permeates the grunge of “Rich Hippies” too. A song that suggests Mykl probably has the same feelings looking at a Glastonbury crowd as me. Take your lentils, you middle class pricks and piss off, basically. “You’re only free cos you can afford it,” he notes acerbically.

Jamie Lenman (ex Reuben, mate of Frank Turner and owner of the best facial hair in music) appears, lending his style to “Belly Aching Beast”. For all that, its Mykl’s stepdad who steals the show wailing away on the harmonica.

“Sadisfaction” does scrappy, scuzzy stuff (a little like the aforementioned DPU) and if “Nothing Better” could cheerfully exist in an indie club, then it does have a thunderous beat down to go with it’s crossover potential, while the rather odd ending track “Ultimately” hints at areas that the band haven’t yet explored.

That seems to be the thing with Sick Joy too. They will go on reflecting the world around them, so if this one is the experiences of the “Council Estate Kid” (in their own words) expect the next one to be about being a rock star.