Offerings guitarist Hörður Lúðvíksson spreads his blackened wings away from the hardcore/grindcore sound of his current band and delves into the world of one-man Black Metal. 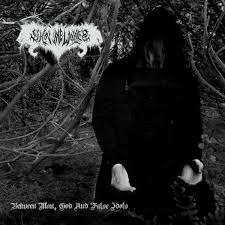 Progressive Black Metal is a curious sub-genre. One minute you feel lost in a dream-like state, albeit one of desolation and un-relenting sorrow, and the next you are thrust forward into a maelstrom of full-throttle blackness accompanied by razor-wire riffs and blasting drumbeats.

Most progressive outfits require multiple talented muso’s with a penchant for things not of this realm. There is however one man who needs no such group of like-minded cohorts and prefers to step out of the shadows and into the blackened light alone. That man is Hörður Lúðvíksson and under the banner of Show Me Wolves he has created something exceptional.

The album shows a lot more creativity and variation than you would reasonably expect from a one-man black metal project. The vocal style is fairly typical, for the most part, of the genre with tortured roars and rasping notes spewing forth the anguish and desolation associated with this kind of unforgiving music. However, musically this is pushing the boundaries completely out of the way and storming forward into a brave new world. You don’t have to listen very closely to hear the headbanging nods to death metal and post-hardcore, which all adds to the mix and elevates it above the standard modern-day Black Metal fare.

Every opening album track should be regarded as a statement of intent to some degree, aside from instrumental intro’s which are more to set the mood like the opening credits of a film. “The lies of his sons ” is the opening gambit from Lúðvíksson and he wastes no time in marking out his territory. It’s a tortured piece of music that sticks closely to traditional black metal ideals but allows a bit of room for musical evolution.

“Amongst us” follows next and again wears it’s black metal influences on its sleeve but gives the first glimpse of the death metal stylings which will appear frequently throughout the album. “Beyond The Sun” is something of a highlight and probably achieves its creator vision most perfectly. Although the spoken word section perhaps doesn’t quite do justice to the rest of the track.

The production is cinematic in its scope and the various swings from sub-genres are dealt with precisely and continuity in the sound is nicely maintained. There is a rawness though that still pervades through the album and crucially the melody is never forgotten amongst the bleak nature of the sound. A fine example of this is “Sea of Trees”, a powerful and evocative track that utilities clean vocals, used again on the album closer “Unknown Reflection” , reminiscent at times of Mark Lanegan in his Screaming Trees heyday. This all increases the variety and displays Lúðvíksson’s confidence and ability in straying from the well-worn path.

Progressive deathly black metal may be a tough sell in 2015 but Show Me Wolves pulls it off with style, passion and integrity. For that Lúðvíksson requires some serious kudos. It’s a first serious stab at what may well be a very dark but fruitful relationship with Progressive Black Metal. Boundaries be damned.