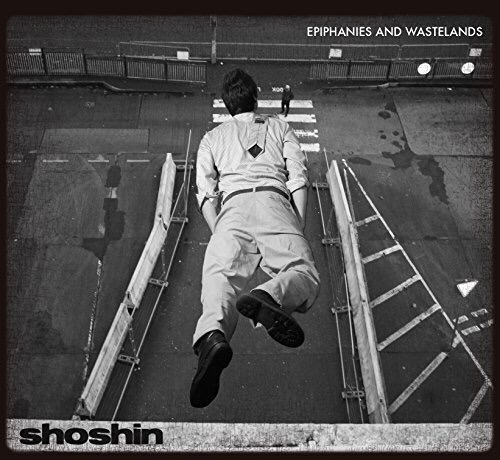 Salford crew who couldn’t be bothered with waiting around for the world to hear their music, so went out to the world, return with a new album.

About 20 years ago wherever you went to Rock City, Nottingham to watch a gig, you’d come out to find a band had set up outside. And we don’t mean a busker either, this was a proper amped-up outfit.

Back in those days such things didn’t have a name. You just knew that when The Black Crowes finished at 1am (no joke!) they’d be there. These days it’s called “Crowd-jacking” (thanks Internet!) and essentially it means that you go where there’s a crowd to see something else and just, well hijack them and make them listen to your music instead.

Salford trio Shoshin certainly think so. Because that’s just what they’ve been doing. And that’s just why they sold 20,000 copies of their first album all around Europe without such trivial things as, you know, a record deal or management. The biggest band you’ve never heard of? You betcha.

That said, even guerrillas have to become legit if they want to govern, right? So for their second record Shoshin have enlisted Producer James Kenosha (Pulled Apart By Horses) while “….Wastelands” is mixed by Chris Sheldon (Heavens Basement). But don’t make the mistake of thinking – as the Wildhearts rather succinctly put it a couple of decades ago – that Shoshin have “licked the steaming phallus if it offers them a hit” because believe us this record is nothing like a corporate whore at all.

The album starts with head and shoulders its best moment. The absolutely brilliant “Same To Me,” a  four and a half minute debunking of both organised religion and the UKIP manifesto, over a swaggering mix of rock, punk and rap, and if the rest of the rest of the record takes a similarly maverick approach to genres, it never quite sounds as vital is it does here.

The album’s lead single “Plan C” gets close and drips with anger, but elsewhere its one of the more straightforward songs on the record that really impresses. The short, sharp, two minutes of “janine” features some wonderfully angular guitar which echoes Therapy? at their best.

That said, though, there are plenty of highlights amongst the songs. There’s an attempt at reggae overtones with “New Day” and “Linoleum” has “anthemic” writ large all the way through.

There are many things to like about Shoshin. There is much to commend their attitude to both the business of music and also the music they create. Perhaps they still need a touch more focus, more likely they don’t give a toss what anyone else thinks and will go about it in exactly the way they want. More power to them for it.