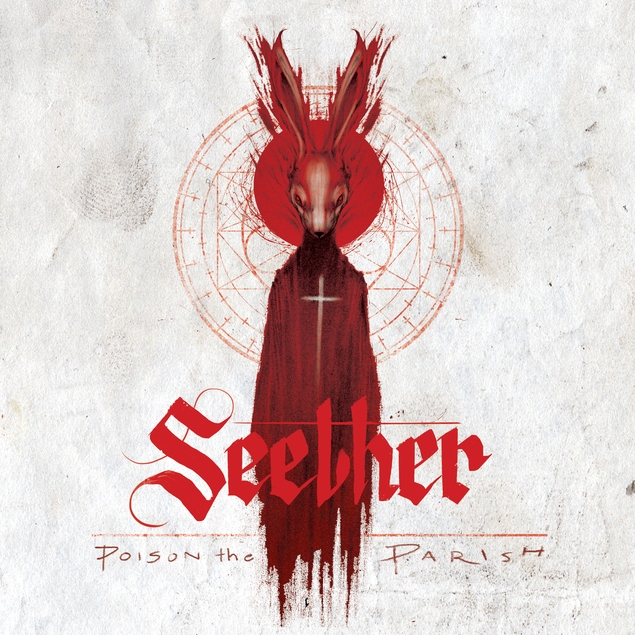 You’re jaded and broken/like the poor and the wretched/but time will sour milk just the same….I just gotta be famous.

Those lines appear – give or take – about 100 seconds into “Stoke The Fire”, the first song on “Poison The Parish” Seether’s first album for three years, and if they are proof positive that the band’s lyrical catharsis is still there, the mighty riff that it ushered itself in with, is conclusive evidence that they have, well, rediscovered the fire.

A band who were always one of those that were heavier when they played live (a thought that struck this reviewer when watching them for the first time a couple of years back) then that is no longer the case.

“Betray And Degrade”, basically the best song Kerbdog never wrote, absolutely crushes and “Something Else” kicks in with something that is worthy of Soundgarden.

The three piece have been around for 17 years, and at this stage of their career could probably be forgiven for coasting. Not a bit of that here.

The songs sound fresh and shot through with the darkness you expect.  “I’ll Survive” is obviously influenced by Nirvana, but the trio (in particular Shaun Morgan, the frontman and songwriter) have never hidden their debt to the Seattle sound, and they are surely the best at giving it a 21st century kick.

“Let You Down” thumps its way in and does the quiet/loud dynamic as well as anyone does, while “Against The Wall” is some light in the shade – and if anyone bought singles anymore it would be a hit. Either way it is a Pearl Jam style arena rocker in waiting.

Indeed, there are a couple in the middle of the record that come squarely from the mid-paced end of things, but like their heavier brethren, there is a quality about the songwriting in the likes of “Let Me Heal”.

“Poison The Parish” is, though, an album which does seem happier when it’s rocking like on the vicious “Saviours”. “Fuck you and your false adoration” spits Morgan, before concluding “you worship yourselves, you’re all just bigots and liars.” And in doing so, it becomes a real highlight.

There is nothing here that dips in quality. “Nothing Left” is a chugger, “Count Me Out” is its perfect counterbalance and “Emotionless” – the longest song here – affords itself the chance to stretch out into other discordant areas, with some unsettling results.

If “Poison The Parish” ends with some acoustic tinges on “Sell My Soul” – which makes a fine use of AIC style double tracked vocals – then don’t let it fool you. This is a heavy – in all senses of the word – album.

Those looking for Nothin’ But A Good Time, as another Poison once said, can look elsewhere. Seether have not ever, and ever will be, been that sort of band. Those looking for one of the best – and darkest – alt rock albums this year will have to offer, can apply right here.