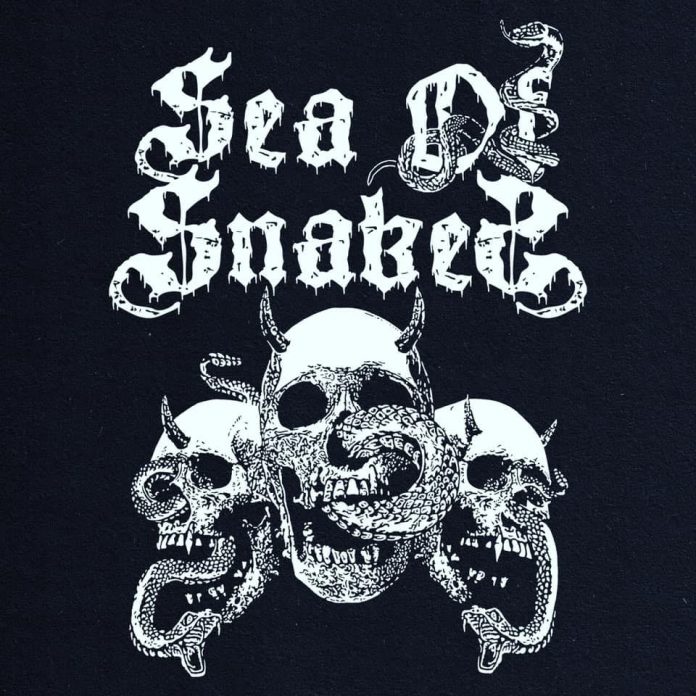 I review a lot of records. I like a lot of different sorts of music too – that’s why this website is called what it is rather than being a slave to a genre.

I put the reviews on social media, its my one concession to the modern world. I started an Instagram account the other day, (this is either proof of the duality of man, or the tyranny of capitalism, depending on your view, given that I think Mark Zuckerberg is the most dangerous person on Planet Earth) but a flick through the albums posted up there will show you that there’s punk, country, rock n roll, pop, singer/songwriter and its only been going just over a month.

But Sea Of Snakes is proof that sometimes, just sometimes, you don’t want nuances in life, what you want is a big riff and someone roaring lyrics, both coming through a Marshall stack at volumes that would get you an ASBO.

Now, I don’t know what amplification SoS use, but I’ll tell you for sure that the rest of this is true.

No frills, no bullshit, and no nonsense about “sub genre’s”, “core” or “post” whatever. The only things black here are the t-shirts and a love of Sabbath.

Look, the phrase “just put the bastard thing on and decide yourself” is frowned upon in reviews, but nonetheless, it’s the one that comes to mind here, because it will literally take you two seconds to see whether this sea is one you want to take a swim in.

The opening riff to “Let The Fire Burn” is a thing of beauty, dark beauty, but still, and when the lead kicks in just after Tracy Steiger has explained that “I’ve watched them suffer and robbed their souls”, then frankly you are wondering where these fellas have sprung from. California is your answer, but these are metal lifers, you can bet.

So, that one sounds like Orange Goblin, the next one “Ride The Line” knows its way around Corrosion Of Conformity’s back catalogue, given the thumping driving energy, and so it goes.

These aren’t riffs, really. “Son Of Man”  ensures they are slabs of guitar not too far from Helmet, Prong, and the likes, and “Fear Behind The Stare” has a go at some “proper” metal. That is to say it builds from a Metallica place – where its gentle but you know it will roar. It does, while “Drink Your Teeth” has the feel of Slayer jamming with Alice In Chains. Its kinda of scary, but goodness its compelling.

“World Of Fire” is not going to win awards for originality, but then, not everything has to. Instead, it’s a celebration of heavy music played by people that clearly love it.