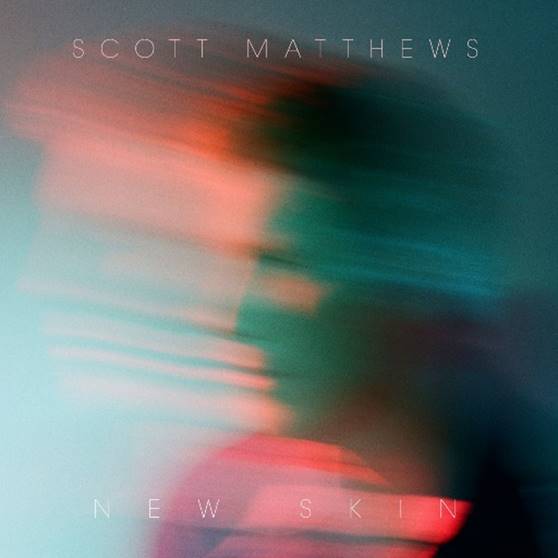 It`s quite surprising to realise that it`s fifteen years since Scott Matthews debut album `Passing Stranger` was released and blew us away with his single ‘Elusive’ winning the Ivor Novello for ‘Best Song Musically and Lyrically’. I have seen him a few times the last being three years ago in the wonderful setting of the Grade 1 Listed church in St Paul`s Square in my hometown of Birmingham. He`d recently become a father and sang about his hopes and fears for his new-born son. Scott has a new release ‘NEW SKIN` his seventh studio album and Covid-19 was the catalyst. He was unable to tour or collaborate with musicians and out of that challenge came this long player.
The album opens with title track `New Skin` which begins with an electronic beat as the quietly shared vocals join in on this mesmerising track which seems to relate to a transformation or metamorphization from old to new, a shredding of one`s old self. We have the singer`s trademark rising and falling vocals and some complementary vocal harmonies. An interesting number follows with `Wait In The Car` which is driven by a repetitive drum beat and guitar riff over which the vocals are shared. We enjoy some synth swathes as the song progresses. A track that seems to encourage us to carpe diem or seize the day and shape our own future rather than waiting in the car.

`My Selfless Moon` was written at the start of the singer`s career and is a gentle piece with instruments almost turned down allowing the ballad like vocal to shine. There`s a more eighties   appeal with `Anniversary` which quietly builds with intricate guitar chords and an electronic drum machine beat. A driving energetic submission that has that slight retro tint.

`The Tide` enjoys an electronic dreamy hypnotic minimalist feel with programmed drumming and a pulsing synth heartbeat with soaring entrancing vocals leading us through this journey with an occasional tambourine shake and guitar hues towards the end. The mellow `Morning` is nearer to what fans would usually expect of this artist, an emotional outpouring heartbreakingly sung and shared.

`Autopilot` is a ballad of sorts which flows along quite dreamily with an underlying electronic drumbeat, ornate guitar chords and wistful vocals. A wonderfully spellbinding composition. The tranquil `Our Time` was another captivating submission which had some ingenious guitar chords throughout. It opens gently and begins to pick up pace midway through to its conclusion.

`Intruders On Earth` is a tender quite ethereal number that feels like it`s going to burst into life but manages to hold itself in check. The album closes with `The Light` a softly shared mesmerising song with picked guitar and synth keys building a platform for the vocals to shimmer.

‘NEW SKIN` is certainly a different direction for this singer songwriter with electronic and ambient tones throughout. It felt quite minimalistic and experimental at times but delightfully contemplative and compelling. Not so much a reinvention but maybe a musical reawakening of sorts for this artist, which has to be encouraged and applauded.