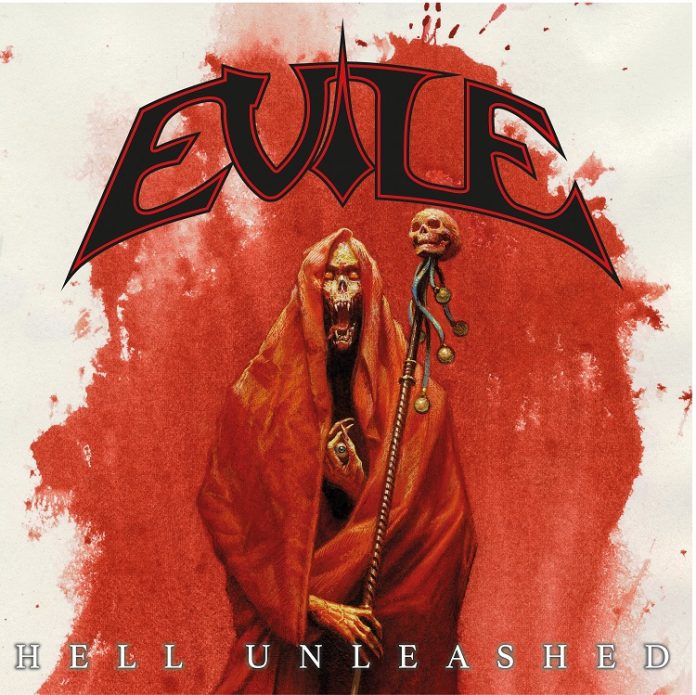 All music fans are snobs. It’s a fact. I don’t mean them ones who ask you what you like and then say “oooh I like a bit of everything, me”. No that’s silly. What I mean is the people that live for music, have loved it all their lives, and use music like others use a diary.

Back in the last decade I was in Nottingham Rock City watching Megadeth for the first time. Megadeth are one of my favourite bands on record. Live? Meh, as the kids say.

The support band that night, was a band from West Yorkshire, Evile, they were called and about 15 seconds into their set we were already buying tshirts and albums. They were brilliant, but it was more. It felt like you were at the start of something. And whether its Three Colours Red back in the 90s, or the bands I champion today, then that’s what you love as a music snob.

Evile released four of the best thrash metal records made by British bands between 2007-2013, and it was more than a welcome surprise when the press release came last year saying they were back.

And yet, there’s always the nagging doubt, right? That one that says “should they?” “Will they tarnish the legacy if they do?” In short, will it be like the Only Fools And Horses reboots where you wish no one had bothered.

When it comes to “Hell Unleashed” though, the answer to all those questions in turn is: “Yes”, “no” and “Christ, no!”

Basically these nine songs, this 42 minutes is as good as thrash metal can be in 2021.

This is a different band – literally – with Ol Drake taking over as singer from brother Matt, and Adam Smith in on rhythm, and it’s also a (slightly) different one figuratively too. It feels as if this a bit heavier too, like they’ve taken on some of the West Yorks sound of their brethren Paradise Lost and My Dying Bride – while retaining their speed.

Opener “Paralysed” is a case in point, it could rouse a mosh anywhere, but the beat downs are heavy and vicious, and “Gore” (which features Bryan Posehn the comedian and actor loves a metal cameo) wafts across the moors before turning into Slayer. The anger, the lyrics “I am the war most people fight in their minds” are full of nihilism, and there are not a lot of laughs here.

There’s an ominous quality to the likes of “Incarcerated”, which lurks, builds and broods, almost ready for its attack and if that’s the longest one (at over six minutes) then nothing really goes for the blitzkrieg attack. “War Of Attrition” pummels you, and “Disorder” is a real highlight with its twin riffing.

Indeed, the riffs slash here everywhere you look, “The Thing (1982)” one of the videos they put out before the record was released is built around a real chugging one, while “Zombie Apocalypse” is arguably the heaviest and most crushing. It sounds like the soundtrack to a film I’d be too scared to watch, but it will be incredible when its played live.

What is very noticeable is that “Hell Unleashed” generally and the likes of “Control From Above” in particular, understand the past even if they aren’t bound to it, and as the title track proves, although there aren’t many bands playing this type of outright heaviness anymore, when it’s done right – and do not doubt it is here – there’s very little that sounds better.

Whether this heralds a new wave of thrash – as was the great hope in the late noughties – is unlikely, but what it does show is that Evile are back, in wonderful form, and the gates of Hell are well and truly open again.