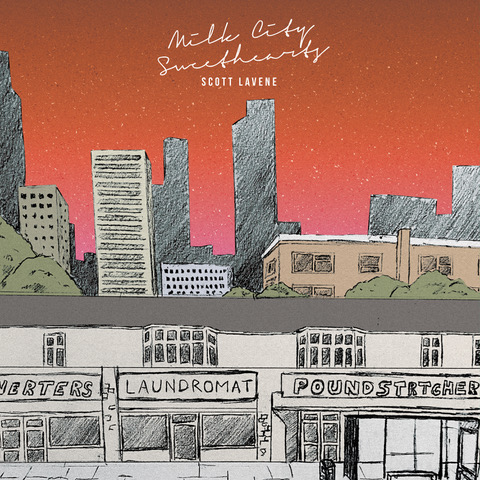 Who the hell is Scott Lavene?? Well, I found this profile on the web, so it must be reliable!!

Scott was born in Essex, raised on power ballads, punk and swearing and was In bands since his teens. He travelled about, scratching out a living with deadbeat jobs trying to find something to cling to. After couple of years in France and a brief stint in New York, including a playing at the infamous CBGB’s, he returned to London and came close to a major label deal with his sordid songs. Instead, he disappeared on a rusty old boat, a floating shed, for five years, hiding from the world, broke and bemused in solitude and lonely debauchery. After five years of this Scott went kaput, so spent some time in a house for the bewildered where he emerged full of life and songs. A self-released album in a band called Big Top Heartbreak and debut solo album `Broke` released in 2019. He now has a follow up album `Milk City Sweethearts` released this month, that he recorded at home, and assembled in a week in his mum’s garage during lockdown

The album opens with `Nigel` an ironic observation on what gets people off in life, well Nigel at least who seems to favour substance abuse and Janet a tattoo freak. There are some fine guitar chords and a constant drum beat throughout and some delightful saxophone swathes thrown in for good measure. I loved the chorus line of “There`s a first time for everything, one day there`ll be a last” on The First Time`, a spoken word narration of first times set to a hypnotic guitar riff and dreamy synth waves. Things that i`m sure we`ve all done but never thought about like scoring a goal, drinking a beer, having sex, falling in love but Scott, I have to admit, has done some things that I haven`t and don`t wish to, have a listen to find out what.

`The Earth Don`t Spin` has a slightly off key musical texture and seems to be a romantic plea to a partner questioning their commitment to the relationship when the fireworks of passion have died down. We have another mesmerising fantasy in `Lord Of Citrus` that seems to relate to moving to Santa Rosa and growing oranges and lemons. A rhythmic guitar riff interspersed with saxophone timbres set a platform for Scott to relate this daydream.

`The Toffee Tickler` has a shook tambourine and a Spanish guitar intro with a backing harmony throughout as the narrator shares some bizarre commentary that veers through rocking horses, being asked to join a religious cult and ending up with a wooden pony and a cup filled with the tears of lust. A very nervous search on the net for what a toffee tickler was, thankfully drew a blank,. We have a reminiscence of first love / lost love with `The Ballad Of Lyndsey` which tells of a teenage romance where the singer relates “we felt like it would last forever, but forever only lasted a year”. This youthful romance sadly ended and Scott sings “I chose amphetamines over you” which may have had a bearing on this doomed love affair.

‘U + Me = Everything` does have a sort of Urban funky Prince vibe about it, another tale of a romance gone wrong with this time a vicar’s daughter being the object of our hero`s desire. We have an account with `Worms` of time spent in the garden when a worm becomes the victim of an altercation with a shovel as the narrator is digging for treasure. As both halves seem to survive this sets off the protagonists imagination where he could achieve so much if he could split in two and use one half to carry out his less interesting tasks. This is all set to such a captivating melody it`ll have you singing along.

`Walk Away` is a curious tale of a day spent at home with constant interruptions. It opens with cowbells, has some wonderful synth swathes, throbbing bass, and a mesmeric drumbeat keeping pace. We get an invitation to join a freakshow with ‘Roll Up’ which veers all over the place musically like a drunk trying to remain upright while walking with skewed guitar riffs and saxophone blasts, Spanish guitar chords and screamed lyrical content. Wonderfully bizarre.

We close out with `Say Hello To Zeus` which is in essence a power ballad, not exactly challenging Harry Nilsson`s version of `Without You` but heading there.

I have to say I loved `Milk City Sweethearts` and spending some time in the Idiosyncratic, eccentric but thought provoking world of Scott Lavene. If you enjoy artists such as Sparks, Beans On Toast and Flight Of the Conchords you`ll love Scott Lavene. Let him into your life.