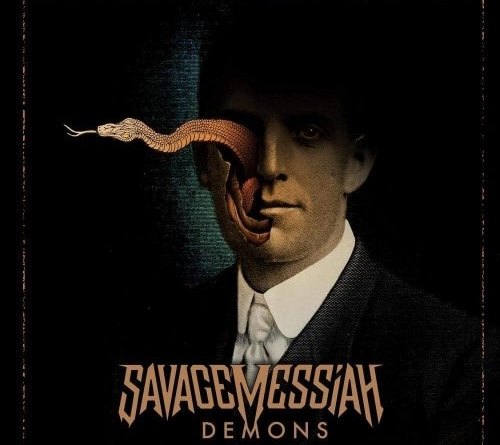 “The harder I work, the luckier I get” goes the old cliché that is often attributed to Samuel Goldwyn. But what if that’s bollocks? What if you have all the talent in the world, work your arse off, and still, it never quite happens in the way it should?

I ask the question, because really we should be talking about whether “Demons” is the album that might just rocket Savage Messiah into arenas. But we aren’t. What we’re talking about is if it could finally be the one that sees them breakthrough.

I am notoriously wrong about what the public will latch onto. I saw Muse support Feeder back in about 1997 and said that they “were shit”, and that they would never be heard of again” (if I was the facetious sort I could say I was half right, I suppose?) but when I got hold of “Insurrection Rising” (Savage Messiah’s blistering debut album in 2009) I confidently predicted to anyone that wanted to listen (and plenty that didn’t) that what we had here was the band that was going to be the metal stars we needed to carry the baton.

It’s ten years on, and what I am saying now is slightly different. Like, “come on people, what’s the matter with you?!” It’s not like Dave Silver, the bands leader, doesn’t share these sentiments a little bit either. I live near Birmingham, where Silver was originally from, and when I have seen the band live over the years, he’s not exactly been shy of letting people know he would have liked more support.

But that’s the past – and as any shit internet meme will tell you – you can’t alter that. What you can try and change is your future, and honestly, with “Demons” Savage Messiah couldn’t have done any more. It is astonishingly good – and a little surprising, but we’ll get to that.

“Virtue Seeker” – the record’s brilliant opening song – is as good as signpost as any to what most of it is like. Not hiding that it loves metal, and proudly wearing its influences on its patch-ridden denim jacket, it is also modern in its thinking too.

There is a freshness here. Possibly due to a change in producer, and David Castillo is famed for his work with the likes of Soilwork, there is a bit of a difference from before in the metal attack. This is metal on its own terms, “What Dreams May Come” a slow-building epic a bit like The Raven Age did on their recent work.

“Heretic In The Modern World” absolutely thunders, and when Silver sings “I stood alone” in the chorus, you can’t escape the thought that he might be talking literally, and this confidence, really manifests itself in the record’s one cover.

Chris Stapleton might not be a name that resonates with many metalheads (trust me, if you like country, he’s the best of the new breed by a mile), but he had a mega-hit with a song called “Parachute”. It never sounded like this then. And it proves my usual rule of pop covers and metal being shit to be totally wrong on this occasion.

“Under No Illusion” perhaps to balance this all out, is as heavy as all hell, and the solo here blisters, it really does. “Down And Out” is the best of both worlds, in a way. Razor sharp guitar work, but with a real eye for the melody of a chorus, and “The Lights Are Going Out” doesn’t half sound like one of Iron Maiden’s latter day prog work outs – but then, if you have a metal band that doesn’t sound a bit like Eddie and the boys, then you’re doing it wrong, in honesty.

There’s a thrash-ish overtone to “The Bitter Truth” and when they sing “no looking back” here, are they reminding themselves? You can guess they might be.

“Until The Shadows Fall” rather helpfully shows the likes of Hammerfall how power metal balladry should be done, and “Rise Then Fall” resolutely gets the fists up in the air, before “Steal The Faith In Me” is a stark warning to just about everyone that Savage Messiah might – in Silver’s words – have “saved themselves from extinction” with 2017’s “The Fateful Dark”, but they are nowhere near done. Listen to the closing beatdown. They are ready, willing and very, very able.

“Demons” might just be the best thing they’ve done in their ten years. It is, hands down, the best metal album of the year so far.

Previous article
BAND OF THE DAY: ZFG
Next article
MARTIN AND ELIZA HEAD EAST TO BEWDLEY