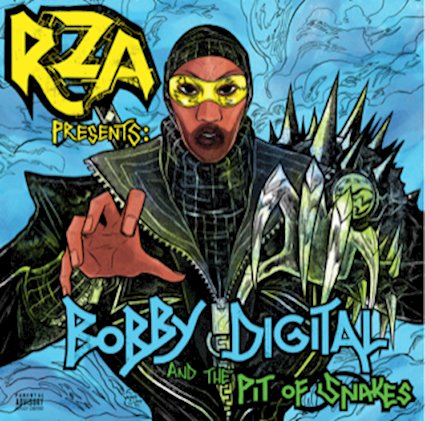 Rapper, producer, actor, and filmmaker RZA brings back his alter ego, Bobby Digital for a brand new graphic novel and soundtrack, RZA Presents: Bobby Digital and the Pit of Snakes, both released this month. The soundtrack merges hip hop, indie rock, and soul to complement and highlight the graphic novel’s storyline, written by RZA, Vasilis Lolos, and Ryan O’Sullivan.

The story follows Bobby Digital as he embraces his id, ego and superego and embarks on a quest to figure out the nature of his reality and himself.

A lightly tapped drum and plucked acoustic guitar leads us into the opening track of this soundtrack `Under The Sun` as the vocals share a slightly rapped spoken word tale of a journey taken and difficulties endured on route. A delightfully sung section or chorus follows prior to a return to the journey with a much more graphic explicit description. We have a repetitive beat underlying `Troubleshooting` which veers from a soulful kind of despondent vocal delivery to more frustrating almost belligerent rapped tones with a dreamy gently shared segment breaking up or becoming a bridge between the two with the gentle composition returning and closing out the number.

`Something Goin On` reminded me a little of the creative numbers I used to listen to during Stevie Wonder`s seventies period with `Talking Book`, Innervisions` and `Fulfillingness First Finale`. This track opens with a questioning female vocal before the male protagonist raps come chants a tale of a friendship gone awry. The track continues to move between both female and male vocals until it`s conclusion. We have in `We Push` a song that describes the perseverance shown by those who start out with nothing and rise to the top. It sways between soulful to more insistent rapped soundscapes during it`s lifespan.

`Cowards` swung between a rapped account to a more dreamy sung part that had tinges of Matadorial like musical accompaniment, slightly different but equally compelling. I thought there was a more trippy vibe to `Fight To Win` which seemed to have our central character almost questioning his own existence.

`Celebrate Your Life` has a dreamy musical soundscape with organ refrains, flute tinges, bass, drums, and vocal harmonies laying a platform for the quite belligerent narration shared above. A kind of suggestion to recognise or commemorate all the positive we have in our lives. This soundtrack closes or concludes with `Outro` which is a brief assessment, reflection or stream of consciousness shared over a gentle percussive background.

I have to say I really enjoyed not only the concept of a musical soundtrack to accompany a graphic novel but also it`s execution. The music shared was utterly compelling and at times quite spellbinding. I only found out that RZA was a founding member of the American hip hop group Wu-Tang Clan towards the end of listening to this release. But as I know next to nothing about the group, it certainly didn`t cloud my judgement.

RZA Presents: Bobby Digital and the Pit of Snakes was a revelation to me and i`m now keen to acquire the graphic novel and view it along with the soundtrack. I recommend you do the same.