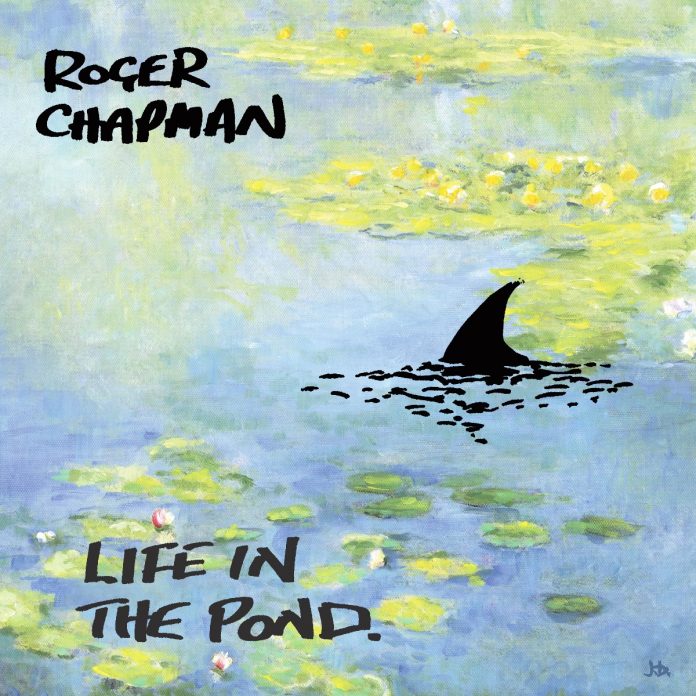 Well, Leicester born Roger Maxwell Chapman is best known for his tenure in the seminal band Family. This renowned singer songwriter will be eighty next year but as he relates “I’ve never stopped writing, and felt the need to hear what I’d put down in music.” Hence his latest studio album `Life In The Pond` is released this month, twelve years since 2009’s acclaimed rarities collection `Hide Go Seek`. This album reconnects with faces from his past, including ex-Family multi-instrumentalist John ‘Poli’ Palmer as co-writer and producer. On the new album the singer has said of the lyrics “Mostly it’s anger at politicians that’s kept me fired up,”. “But I’m also influenced by daily happenings, world news, people, acquaintances. It’s all in the lyrics.”

`Dark Side Of the Stairs` opens up this album and it has a piano led strolling funky texture. A delightful rhythmic offering which utilises the singer`s wonderfully gravelly lived in vocals. I have to say I loved `The Playtime Is Over` with Geoff Whitehorn (Procol Harum) on guitar, Gary Twigg on bass, Paul Hirsh piano-keys and John Lingwood on drums. To any young and aspiring blues singers out there, just listen to this it`s a masterclass. The lyrics even mange to encompass

`Stairway to Heaven` and `Highway to Hell` while the singer confirms “here come the blues” and they certainly do.

`Nightmare # 5` is a thumping hypnotic seven-minute epic which almost has that feel of a field holler call with some captivating keys and a cracking brass section throughout. We enjoy a more up tempo soul-funk vibe with `Rabbit Got The Gun`. Lyrically it has a sort of dystopian outlook. This number allowed the musicians to let loose with a brief drum stint. brass swathes, pulsing organ splashes and pleasant vocal harmonies.

`After the Rain` has that post stormy feel and sort of saunters along with that anything could happen sensitivity. There are some blistering guitar solos and some harmonica tinges. A tuba or brass snippet of Felix Mendelssohn`s The Wedding March introduces to `Having Us A Honeymoon`. A sort of New Orleans frolic with some charming twinkling piano keys, sublime fiddle playing and rolling drums that allow the gruff vocals a real platform to shine.

`Snake` is a reimagining of the Oscar Brown written `The Snake` which became a hit for Al Wilson in 1968 and was taken up and became a Northern Soul floor filler. It`s almost unrecognisable as it’s a slowed down almost sleazy bar room bluesy offering. But the biblical lyrics of the chorus “Take me in tender woman, Take me in for heaven`s sake, Take me in tender woman, cried that nasty nasty snake” could have been written for this singer`s edgy imploring, pleading voice.

There a quite moving nostalgic quality to `On Lavender Heights` a stripped back number with keys, vocals and the occasional brass and string inflections. A quite mesmerising submission.

`Green As Guacamole (GAG)` returns with a rockier touch with some quite acerbic lyrics while the penultimate track `Collar Turned Up` is a more mid paced at times bluesy song with some saxophone splashes.

The album closes with `Naughty Child` a slow burn with some electronic tinges. I not sure whether it`s autobiographical but i`m sure it could be.

`Life In The Pond` is an interesting release which encompasses a spectrum of influences from blues, soul-funk , Stax, jazz to rock. If anyone thought that Roger Chapman was going to drift off into the background with his pipe and slippers, have a listen to this, that ain`t gonna happen.

To steal a line from late great Bill Shankly “Form is temporary, class is permanent”