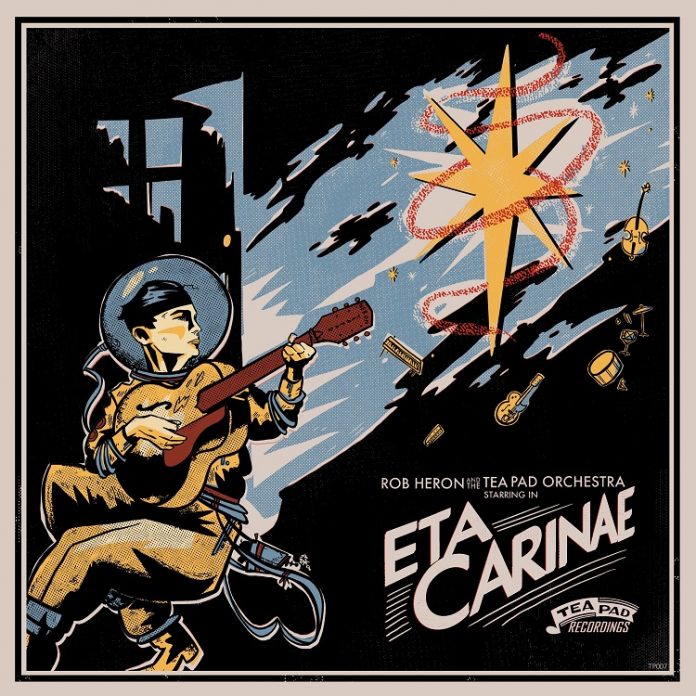 It’s strange that despite the death of the single, I’m getting more and more EP’s to review.

As someone who spent pretty much every lunchtime from 1994-99 rummaging around EP’s in record shops, and who counts b-sides as some of his favourite things.

So the renaissance of the EP in the streaming age is to be applauded.

“Eta Carinae” is a case in point. The 4 tracks (there’s a “Radio Edit” of the title track too, but as any single junkie knows, they weren’t proper b-sides) here are the second release from Rob Heron And The Tea Pad Orchestra this year. A follow up to the brilliant “Soul Of My City” which emerged in the winter, and showed, I proclaimed, that: “Rob Heron And The Tea Pad Orchestra sound like a million bands, but they mix it all together to make something that tastes unique. And if that’s an overused word, so much so that it’s almost lost meaning, then truly it is apt here. These boys, you see, they don’t belong in an era.”

That’s all still true, and this kind of jazzy blues is all over three quarters of “Eta….” too. From the glorious hoedown of “Swinging Like A Brick” (which makes you want to see them live, a thing I still haven’t done) which is a real party, to the highlight “Pocket Full Of Nothing”, which seems to go by the old George Best maxim of “I spent most of my money on drink and women, the rest I wasted……” and the darkly tinged “Black Dog”, which seems to hide a real melancholy, it is all made for fans of his work.

That is to say, by not belonging to any era, this 50s flavoured stuff fits in just as well today. That said, the title track takes things into a different realm. Almost psychedelic, it recalls The Beatles, and the way it builds almost into something approaching Big Band exemplifies the wider scope of this sound.

Exactly the type of thing that singles are for, you might say, it shows a band that is brimming with ideas and has the talent to see them through. And the fact it makes me feel nostalgic is merely a bonus.