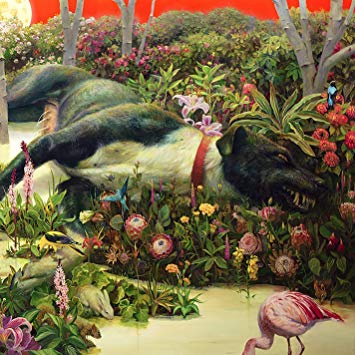 It’s interesting that although they’re from California, Rival Sons have always had the Southern Rock sound. For this one – their sixth – they’ve been to Muscle Shoals and teamed up again with Dave Cobb, the producer who worked with them on their stunning “Pressure And Time”.

I watched a documentary on the Muscle Shoals Studios once, and the artists spoke of the magic of the place. There certainly seems to be some here, too, because Rival Sons have not sounded this good in a long time.

Since the aforementioned “….Time”( on which myself and a friend saw them deliver a gig that was somewhere between stunning and transcendent, the sort of show that you imagine will herald greatness) RS have perhaps been the sort of band that is capable of great moments but hasn’t ever quite made a great collection of them.

“Feral Roots” is that, but its more besides.

There is a definite feeling of, well, back to the roots about opener “Do Your Worst”, which has a big swinging groove and a massive chorus to back it up, while I have absolutely no idea what “Sugar On The Bone” is about, but goodness me, it sounds righteously filthy.

It’s heavier too – no they’ve not gone Slayer on you – but there’s a real thump to this, and less of the ethereal. Much of this is down to Mike Miley crushing the drums – he even does a solo on the mighty “Back In The Woods”.

But they haven’t totally eschewed the mystical either. It’ll always be a part of what they do, and there’s a real feel of the 1960s and a Doors-ish jam about “Look Away”, while the gorgeous title track is warm and folky.

But this is coloured with more textures than that. There is, for example, a lead break in “Too Bad” that would be best described as “Stoner” but the song itself is a balladic affair. It is nonetheless typical of the skill on show here.

Maybe it was the “magic” that I talked about earlier, but there’s some real Muscle Shoals soul about “Thank You” and it is perfectly done, with the backing vocals giving a real Motown flourish too.

“Imperial Joy” ramps up the sex appeal. “I shoulda gone to bed, but I stayed up too late, the things I like to do there keep me wide awake” sings Jay Buchanan and if you could hear a naughty grin, then you’re hearing one here.

“All Directions” calms things down, but with the absolute sound of a gentle breeze, while “End Of Forever” unleashes something just a little primal and, there is something a little Gospel sounding about “Shooting Stars” and the key line “my dancing is better than your marching will ever be….” Seems to offer the thought that even after all this time, all you need is love. And really, what’s wrong with that, when all is said and done?

Reading some articles online about the album prior to release, there was an interview with Buchanan where he said something that I think is pretty telling: “Anybody that you’d think would be one of my influences, it’s probably them”. And when you think about it, all the bands I’ve named here, and the ones I haven’t, like Led Zep and the rest, you just know that’s what Rival Sons love.

On “Feral Roots” they’ve breathed new life into themselves by looking back to that rich and varied past.