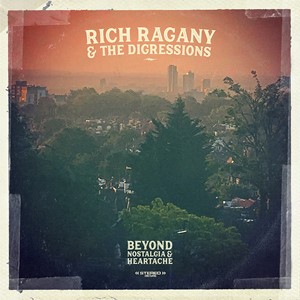 Regular readers (and bizarrely there are some!) will know that my reviews love a digression. There’s never an obscure reference to Frasier that I can’t get in, no mention of record shops I used to frequent too much of a stretch, while various family members get in from time to time.

Ironically, then, with Rich Ragnay And The Digressions lets get straight down to business, shall we?

Ragnay was billing himself as Rich Rags when he sent the Role Models album to me in 2016.  That record, “The Go To Guy” was brilliant. Pitched somewhere in between Tom Petty and The Replacements, it is exactly the type of gritty singer/songwriter heart on the sleeve and heavy in heart stuff that I’ve always loved.

Now, with a longer name, Ragnay has fleshed those ideas a little with “Beyond Nostalgia And Heartache”, but lost none of that rock n roll, lip curl and gang mentality that RM had too.

One or two of the same members, Drummer Simon Maxwell (once of the mighty Yo-Yo’s) but with Gaff of MV old faves The Glitterati, together with Kit Swing providing the guitars, there’s something distinctly new and yet reassuringly familiar about these songs.

Look I am not going to insult anyone’s intelligence here, to listen to “Sometimes You Can Hear The Voices” and such here, is to listen to the music of artists like Bowie, Mott The Hoople, The Beatles even, and you imagine that’s exactly what double R wanted as that’s what he does too.

The wonderful title track (and like so many here it is built around a gorgeous vocal harmony as much as anything for which Swing must take credit) is as laid back and warm as it gets. Of course, you can dig a little deeper and find some real pain in any of the lyrics here, but that’s up to you. This sounds as welcoming as it gets.

Its noticeable too, how much of a band effort this seems. Like so many records it was recorded in the pandemic with Ragnay sending the demos out and the band adding bits and pieces. Yet, it sounds as cohesive as can be. “Heartbreakers Don’t Try”  – arguably the best thing here –  appears to be as organic as expensively priced Waitrose tomatoes (and far more tasty) for example.

The power pop overtones of “It Was Lonely At The Time” runs it close, mind you, and if you ignore the gleeful handclaps, this is the type of thing that would in another life, on another album, be the sort of thing that your hardcore troubadour’s would do. This isn’t that record, though. Not a bit.

“Fade In Blue” jingles and jangles, but balances that with a proper strident drumbeat from Maxwell and it is a de facto duet with Swing too, “Sleep” is as different again, floating in on some widescreen acoustics that seem to be staring at the vast expanse. If, however, you were drifting, then “Marionette” adds a near punk kick to sort that.

One thing it is easy to overlook on this record (so much so, actually its taken me over 500 words to get to it) is how catchy this is. “The Man Who Couldn’t Give It Away” has a pomp air, a little like ELO maybe, but its got a hook Jeff Lynne’s lot would be proud of too.

“Last Chance, Dear” does a neat line in world weariness, “Blackout Till Tuesday” is a simple – and simply glorious – escape: “I don’t care anyway, it’s a long and lonely night” offers its denouement and this has echoes of the solo work of the brilliant Sulo (ex Diamond Dogs) and the idea that this is heavily influenced by the sounds of the late 60s and early 70s has never been far away, anyway, but “A Long Way To Yesterday” brings it right back to the fore.

“This Is How You Spell Tonight” sounds kind of relaxed and content with its lot. It’s tempting to think of this as being recorded on some front porch somewhere out in Middle America (to borrow a line from Counting Crows), and not somewhere in Surrey.

That is sort of fitting though, because “Between Nostalgia And Heartache” could really have been anything it wanted. It is between contentment and despair anyway it seems, but more broadly, this could have gone in many a direction. You suspect, though, that whatever it did, this would have been fabulous.