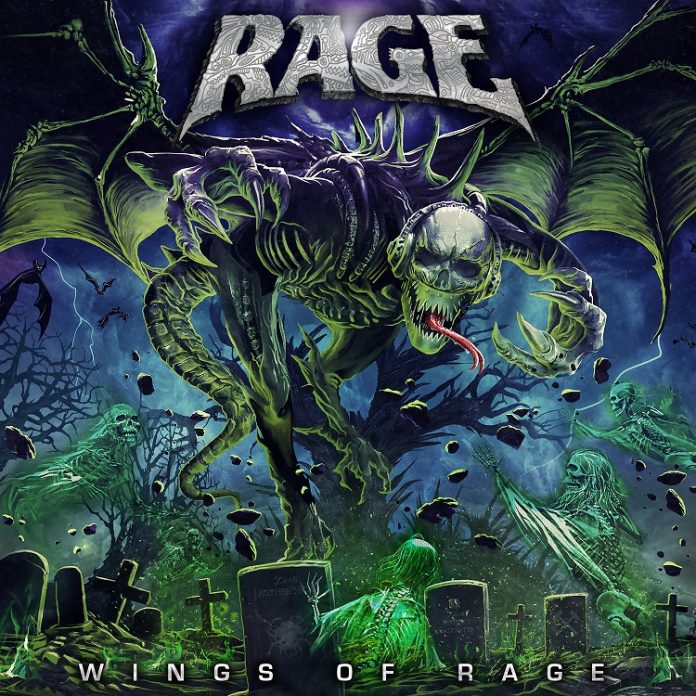 With it being the end of the decade the other day, there seems to have been a lot of reflection on the “best of” the last ten years.

I’ve no time for such reverence. Time, after all, is a man-made construct. But before we get bogged down in philosophical argument, then “Wings Of Rage” set me thinking.

Outside of Maiden (and I await news of this possible new album with bated breath like the army of fans elsewhere) I am going to put it out there that Rage have just about the most consistently excellent body of work of any metal band in the 2010’s.

2017’s “Seasons Of The Black” carried on the awesome work of “The Devil Strikes Again” and now – via a switch in record label – comes “….Rage”, and completes the hat-trick of brilliance.

In fairness, 24 albums in 35 years rather suggests that Peavy Wagner and the revolving cast (albeit the three albums I have just mentioned have the same line up) that he worked with, can knock out a tune or two, but there is a real feeling that even by their standards, this is a belter.

It’s a belter because it doesn’t fit in. It isn’t power metal – although there is a grandiose quality to the likes of opener “True” that goes close, and it isn’t thrash either, although “Let Them Rest In Peace” and the likes could scare up a moshpit at a moment’s notice.

Absolutely crucial, though, is that it is modern looking. There’s nothing trad here. Not in the crunching sound, and not in the lyrics either. In fact Peavy has taken the modern world around him as his canvas here and it is utterly fabulous.

“…Peace” takes leaders and warmongers to task, for example (and given that as I type this, there is a very real possibility that WW3 is breaking out that is kind of apt) and “Chasing The Twilight Zone” is like Saxon on steroids, but this is so much of its time that it isn’t so fussed about denim and leather,  just the sound that brought us all together as it were.

And make no mistake, even if this is no rehash, it does have its roots in the classics. “Tomorrow” thunders and Vassilios “Lucky” Maniatopoulos beats his kit to within an inch of its life, while the title track is glorious. Tight and taut riffing something not too far from All PostsProng (and Marcos Rodriguez is astonishingly varied guitarist) but with the heart of a NWOBHM track. That’s how they do it around here.

It also has two brilliant ballads too. “A Nameless Grave” has some orchestral tinges (Rage toured with an orchestra last year and it finds its way into the mix) and a real massive scope, while “Shine A Light” (one of the ones with a real social conscience) is so good that it isn’t far from being the best thing here). As it is, that honour probably goes to the one before it “Don’t Let Me Down”. On the sleeve notes here Peavy explains that he is “spiritual” despite not liking many organised religions, this one is his plea to a higher power – it is also a truly sensational song.

Perhaps because he’s so proud – and maybe invigorated? –  by the current band, Peavy revisits one of their classics on this, “HTTS 2.0” is a reworking of the mid 90s single, “Higher Than The Sky” and its class shines through. It certainly stands up against the other wonderful things this album has to offer. “Blame It On The Truth”, on which Wagner surveys the current state of the world and wonders what the truth actually is and if we get what we deserve.

It all ends in what is ostensibly vicious fashion, “For Those That Wish To Die”, though, is so warm hearted. Offering a helping hand to those who are struggling, but doing it with a real metal feel.

It is but another example of an album that seems to burst with a freshness. There is nothing stale here, and if you are looking at how to sustain your career for 35 years then you could do worse than look at Rage.

Moreover, if you are looking for a wonderful modern yet classic sounding Heavy blinking metal record, then “Wings Of Change” is a must.

Previous article
MAGNUM HEAD OUT
Next article
BAND OF THE DAY: OUR CITY FIRES